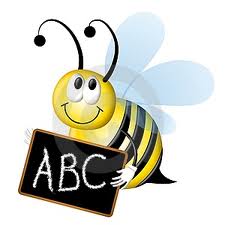 Scientific American has an article called "Do Bees Have Feelings?" When bees eat, "they gently curl and uncoil their tapered mouths toward food, [and] you sense that they’re not just eating, but enjoying." Some of their behaviors look like they are agitated or annoyed. Recent studies by zoologist Geraldine Wright at Newcastle University in the UK suggest that "honeybees may experience something akin to moods."

Wright wonders if bees tend to see the glass half-empty. They may have feelings and experience emotions. What is it like to be a bee?

This last question is a take-off on Thomas Nagel's famous essay "What Is It Like to Be a Bat?" Nagel writes: "I assume we all believe that bats have experience... I have said that the essence of the belief that bats have experience is that there is something that it is like to be a bat." I would think so. It's not so clear, however, in the case of a bee, or an earthworm. The Scientific American article says: "invertebrates lack a cortex, amygdala, as well as many of the other major brain structures routinely implicated in human emotion. And unsurprisingly, their nervous systems are quite minimalist compared to ours: we have roughly a hundred thousand bee brains worth of neurons in our heads." Bees don't have a brain; bats do. Yet it still seems reasonable to think bees "experience" something, and that there is "something that it is like to be a bee." Bees have, e.g., the "rudiments of our stress response system."

Check out the entire essay for how Wright and her associates tested for bee-feelings.

But the essay admits that Wright has not proved that bees feel human-like emotions. "The question is still on the table: do they experience emotion in a way that we would recognize, or just react to the world with a set of glorified reflexes?"

For now I'll go with: a set of glorified reflexes. And then, at a little anthropocentricism to the mix and we have our human projection upon the secret life of a bee, uch ike I felt sadness when putting my father's old recliner out for the garbage. I felt like I was abandoning it, as if a chair could feel lonely!


I cannot help but see anthropomorphism in Wright and her colleagues when I read something like this. "We’re instinctively willing to call a dog or a person anxious when we see behavioral evidence of pessimism. We see a “timid” but “personable” dog experience what is “quite likely” separation anxiety, test it for pessimistic biases, and upon finding these (as was done last year), conclude that dogs indeed feel anxious when left alone. “It is logically inconsistent,” Bateson and colleagues say, to conclude this “but to deny the same conclusion in the case of honeybees.”"

I don't think so. I think this is an example of reading in too much. I think there is something like being a bee. I am not so certain we will ever be able to get at it.
Posted by John Piippo at 11:13 AM