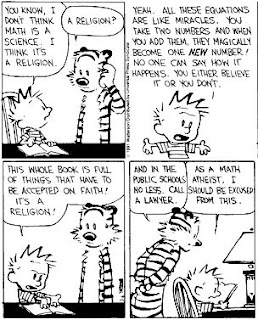 I'm teaching again at Monroe County Community College. I am so thankful for the opportunity to do this.

I teach Intro to Logic, and Philosophy of Religion. I started off Logic by giving some basics. Here they are.

Logic, in philosophy, is about the making and evaluating of arguments.

An argument has one (and only one) conclusion, and one or more supporting premises.

This is a hard one for a lot of students, who are relativists at heart (and unreflectively so). So I give another, easier-to-see example. The temPerature outside is now 70 degrees F. This statement is either T or F. If T, then (isn't this obvious?) it is T for everyone. If F, then it is F for everyone. What if someone says, For me the temperature is 71 degrees F. That statement, if it expresses a truth about the person uttering it, is true, and true for everyone. It changes nothing about the statement The temperature is 71 degrees F.

Logic has no necessary connection with the disciplines of psychology, sociology, or anthropology. The truth or falsity of a statement has nothing to do with issues like what a person believes, how they were raised, where they were raised, how many believe certain things, and so on.

Thus Logic is the philosophical tool for discovering truth.
Posted by John Piippo at 9:17 PM