Why Is There Something Rather Than Nothing? 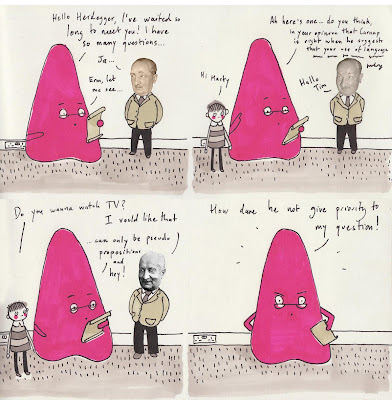 In the early 1970s, when I was an undergraduate philosophy student, I was introduced to the writing of German philosopher Martin Heidegger. By Heidegger scholar Michael Gelven. Gelven had a great influence on me. Some of the way I now teach is indebted to him. Then, in seminary, I was privileged to do an independent study class on Heidegger with theologian Tom Finger. I read Heidegger's Being and Time. What a difficult book! Tom met with me and taught me - thank you!

I was intrigued by Heidegger. It was then that I came across his famous question "Why is there something rather than nothing?" (Introduction to Metaphysics) This is, arguably THE BIG QUESTION. But, alas, Heidegger was not always helpful. he raised the question, but his writing was abstruse. Rudolf Carnap thought his writing was metaphysical nonsense. To illustrate, Carnap asks us to consider this, from Heidegger.

OK. (While others play "free cell" I study quotes like this.)

40 years after my introduction to Heidegger and THE QUESTION, I'm still with it, intrigued by how certain people might respond to it. Holt's book features extended interviews with cosmologists, from Adolph Grünbaum (a philosopher and atheist) to Richard Swinburne (philosopher, theist) to Roger Penrose (mathematician) to Steven Weinberg (Nobel Prize–winning physicist). Holt offers additional thoughts in between, such as a chapter dedicated to giving us a "Philosophical Tour D'Horizon."

So far it's a good read.