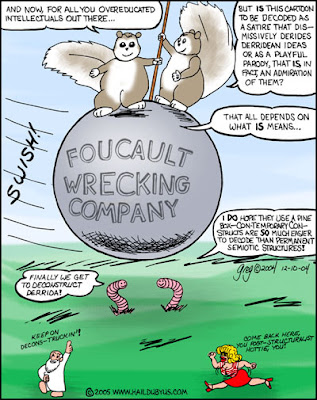 I just finished reading James Perkinson's excellent, thick White Theology: Outing Supremacy in Modernity. Jim taught some of this material at Payne Seminary this past Monday. I contacted him, since followed him for three days at Payne with my Spiritual Formation course. Jim Devries and I are reading Jim's book. He lives in Detroit, and we're all going to get together to discuss this text.

Perkinson is a great scholar and a beautiful, poetic writer. His is a deep book. Even though it's 250 pages, it seems as if he creatively labored over every sentence. It's also hyper-intellectual, in  a helpful way. I learned much from reading it.

Jim is indebted to deconstructive analysis, and it works to form an interpretive framework through which to see the culture of color. What is "deconstruction?"


The word "deconstruction" has become popular, and with its popularity it has lost its original philosophical meaning, which can be traced to Jacques Derrida via Martin Heidegger. See this essay by James Faulconer.

Faulconer writes: "For Derrida deconstruction is an attitude, in the root sense of that word. It is a position one has with regard to something."

" I take that to be the general meaning of the word deconstruction as Derrida has used it: not just using our words and concepts against themselves, but showing what has been left out or overlooked. In fact, better: showing that something has been left out or overlooked, that omission is structural to any text -- and that we can find those omissions in the structure of the text -- without necessarily being able to specify what has been omitted."

"Deconstructive criticism is not intended to suggest a way to make the book finally complete, but to show its necessary incompleteness. Deconstruction is used to show that a work does not adequately address something, not that it should have."

The word "deconstruction" is often used as a synonym for "destruction," or "tearing down." That's not what Derrida meant by it. Faulconer quotes Derrida: "I think that people who try to represent what I'm doing or what so called "deconstruction" is doing, as, on the one hand, trying to destroy culture or, on the other hand, to reduce it to a kind of negativity, to a kind of death, are misrepresenting deconstruction. Deconstruction is essentially affirmative. It's in favor of reaffirmation of memory, but this reaffirmation of memory asks the most adventurous and the most risky questions about our tradition, about our institutions, about our way of teaching, and so on."

Perkinson gazes through the hermeneutical lens of Derrida-ian deconstruction to show, e.g., what is unsaid in the encounter W.E.B. Du Bois had, as a young black boy, with a white girl. Excellent!
Posted by John Piippo at 7:21 AM