The Planting of the Seeds of Our Discontent: The Empty Self in "Revolutionary Road" 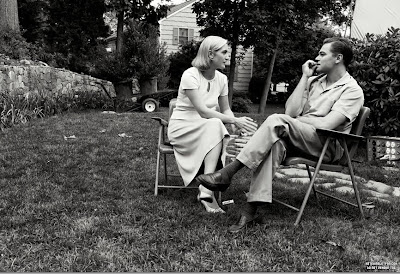 Linda and I just watched "Revolutionary Road." It does an excellent job portraying "the empty self." which is the self that is nothing, the self that has nothing. Leonardo DeCaprio and Kate Winslet are so convincing that I fell like calling them and asking "Are you guys OK?"
In the movie DeCaprio and Winslet "feel" nothing. This causes them to despair because they've come to believe, like most in America today, that the summum bonum of existence is: to feel... something... anything. DeCaprio works at a job and a marriage and family that "bore" him. He's not found his reason for living. The children barely appear in the film and are, essentially, a non sequitur. It's all about two vacuous people who not only still haven't found what they're looking for but have mostly given up looking, and probably wouldn't recognize "it" if they found it.
DeCaprio's wife Winslet sees some kind of greatness in him, and thinks if they just pack up and go live in Paris DeCaprio's greatness will get unpacked. The thought of Paris gives her strong feelings. But these feelings eventually get dashed, and she becomes the Queen of Non-Feeling. At that point in the film she's worse than a Stepford Wife.
"Revolutionary Road" takes place in the 1950s in a Norman Rockwell America. Here, in our land of unlimited abundance and growth and peace, the seeds of our discontent were planted. There's no "revolution" happening on this road, only restlessness and anomie ("an erosion, diminution or absence of personal norms, standards or values, and increased states of psychological normlessness," here).
Now, in 2010, we in America are in full-blown anomie. Emile Durkheim defines this as: "If the rules of the conjugal morality lose their authority, and the mutual obligations of husband and wife become less respected, the emotions and appetites ruled by this sector of morality will become unrestricted and uncontained, and accentuated by this very release." (Here)
I love (in a sense) the way philosopher J.P. Moreland describes the empty self in his book The Lost Virtue of Happiness. I'll share this in a future post.
Posted by John Piippo at 10:45 AM