Charles Taylor Won't Be Seen On "The Atheist Bus" 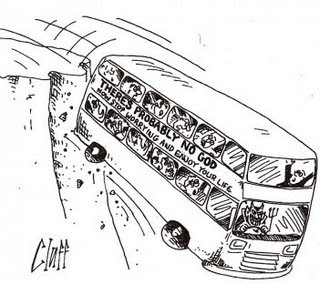 Charles Taylor is interviewed in Philosophy Now and asked about what he thinks of the "atheist bus" signs such as, "There's probably no God: now stop worrying and enjoy your life." Taylor responds:
"I heard about that! It’s hilariously funny. It’s very odd, isn’t it? I’m trying to figure out why this is happening in our time. This new phenomena is puzzling – atheists that want to spread the ‘gospel’, and are sometimes very angry. I think it may be rather like the response of certain bishops to Darwin in the 19th century. The bishops had a sense that the world was going in a certain direction – more and more conversion, and so on – and then they find they’re suddenly upset in their expectation and they get very rattled and very angry. Similarly, we’re seeing this now among the secularising intelligentsia – liberals who felt that the world was going in a certain direction, that it was all going according to plan – and then when it seems not to be, they get rattled. So you get these rather pathetic phenomena. Putting things on buses as though that’s going to make people somehow change their view about God, the universe, the meaning of life and so on. A bus slogan! It’s not likely to trigger something very fundamental in anybody."
Posted by John Piippo at 1:53 AM