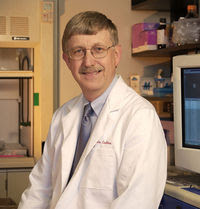 Barack Obama has chosen Francis Collins to lead the National Institutes of Health. "Obama called Dr. Collins "one of the top scientists in the world" in announcing his nomination Wednesday. "His groundbreaking work has changed the very ways we consider our health and examine disease," Obama said."
Collins, former head of the Human Genome Project, is author of The Language of God, which argues for God's existence on the basis of language-like DNA.
'"It is humbling for me, and awe-inspiring, to realize that we have caught the first glimpse of our own instruction book, previously known only to God," he said at a 2000 White House ceremony marking release of the genome's first draft."
Posted by John Piippo at 11:59 AM