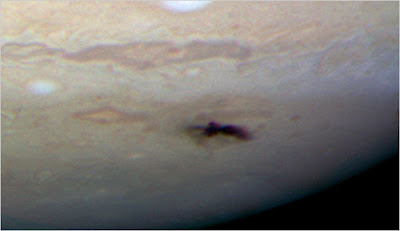 Here's an article on the "Jupiter Effect," which forms part of Rare Earth Theory. On July 19 Jupiter took a hit and got a black eye. "An object, probably a comet that nobody saw coming, plowed into the giant planet’s colorful cloud tops, splashing up debris and leaving a black eye the size of the Pacific Ocean. This was the second time in 15 years that this had happened."

But is Jupiter really our "King of Planets as father-protector?" Some say yes, others aren't so sure.
Posted by John Piippo at 8:57 AM