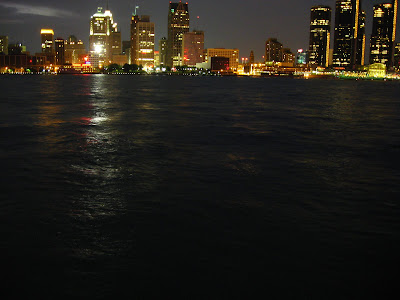 (Linda and I went on a date in Windsor, Ontario, last Friday night, where I took this picture of the Detroit skyline.)

OK - I'm on a bit of a J.P. Moreland kick right now. Having spent some days with him at a recent conference I wanted to read some more of what he's written.
J.P. has a brilliant mind. I love how he uses it to do kingdom-of-God things. But for J.P. it's not only about good thinking, but also about the presence and power of God. J.P. gave a number of personal, experiential examples for us at the conference. He gives some in his book Kingdom Triangle, and also in The Lost Virtue of Happiness (with Klaus Issler).
I loved his chapter in the latter book called "Defeating Anxiety and Depression." Since I've struggled some with these as well (but not to the extent J.P. has) I very much appreciated what he has to say here.
He also has journaled for 30 years, as have I. He records, among other things, events that can best be described as supernatural and miraculous. J.P. is, to me, a credible witness to the reality of such things. He's certainly a brilliant logician and reasoner who evaluates slowly and cautiously and is not someone who just embraces every claim to a miracle. But he's personally experienced and seen them, saying that "after thirty years of journaling I have hundreds of [miraculous] stories."
I have also written many "signs and wonders" down over the years in my journal. I have found that remembering them can work as an antitdote to worry and depression. J.P. agrees, and writes that meditating on such things "can create faith and expectation when one brings one's hardships before the Lord. It also creates hope because it reminds us that God is a living God who shows up to care for His children!" (Happiness, 175)
I think J.P. is now an important witness to evangelical Christianity of, not only the reasonability of faith in Jesus, but also the experiential reality of a God who, yes, heals the sick and delivers the oppressed.
Posted by John Piippo at 12:31 AM