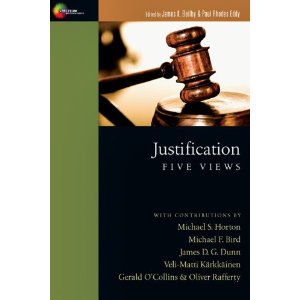 This book, Justification: Five Views, is going to be a lot of fun.

"Of all the multiple views books, this one was needed most. It is also perhaps the best yet: getting Horton, Dunn, Bird, Kärkkäinen, O'Collins and Rafferty all at the table at the same time under the same roof is both a tour de force and a brilliant example of how their interaction can teach each of us. One word is needed most for the justification debate at work among (mostly) evangelicals, the word listen, and if you listen to the pages of this book you will see examples of not listening and listening. The challenge remains for all of us: will we listen again to the Scriptures to hear what it says about justification? Or will we impose our systems of thought on the Bible?" (Scot McKnight, North Park University )


"Beilby and Eddy have raised the bar with regard to this multiple views genre, this time bringing together world-renowned scholars and theologians to engage a very hot topic. Reading Justification: Five Views is like being treated to five books by five masters of their craft, each going deep into the details at times but yet also stepping back to cover the forest ably enough for the less initiated to appreciate what is at stake. A must-read for those interested in the ecumenical implications of the doctrine of justification." (Amos Yong, Regent University School of Divinity )

"No single volume could possibly cover all Christian views of the doctrine of justification. Justification: Five Views courageously selects five contemporary views and helpfully presents and critiques them. Each view is expounded and defended by a leading proponent and then critiqued by other contributors. Anyone interested in the current discussion about this crucial Christian doctrine must read this book. It sheds more light than heat in an area of theology almost burned over by heated polemics. Of all the 'views' books out there, this is one of the best." (Roger E. Olson, professor of theology, George W. Truett Theological Seminary, Baylor University )

"A wonderfully useful book. After a superb historical survey of the issues to be debated, five influential approaches to the doctrine of justification by faith are presented and defended by credible and engaging representatives. I can think of no better introduction to these important debates than this outstanding volume." (Alister E. McGrath, King's College, London )

And the five views are:

Yet another good Pauline resource, especially relevant to myself and Redeemer as we are now on a several-year preaching project on the Christology of Paul.
Posted by John Piippo at 10:41 PM