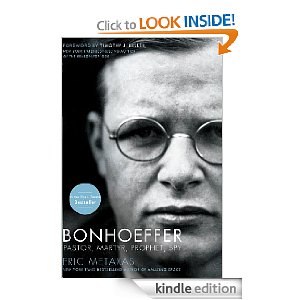 If you own a Kindle then you're probably aware that Eric Metaxas's excellent biography of Dietrich Bonhoeffer is on sale today for $1.99.

This is a steal! It was published this August, and has won some awards. Here's the reviews at amazon.com.

''In Hitler's Germany, a Lutheran pastor chooses resistance and pays with his life. . . Eric Metaxas tells Bonhoeffer's story with passion and theological sophistication, often challenging revisionist accounts that make Bonhoeffer out to be a 'humanist' or ethicist for whom religious doctrine was easily disposable. . . Metaxas reminds us that there are forms of religion -- respectable, domesticated, timid -- that may end up doing the devil's work for him. --Wall Street Journal


''In this weighty, riveting analysis of the life of Dietrich Bonhoeffer, Metaxas offers a comprehensive review of one of history's darkest eras, along with a fascinating exploration of the familial, cultural, and religious influences that formed one of the world's greatest contemporary theologians. A passionate narrative voice combines with meticulous research. . . Abundant source documentation brings to life the personalities and experiences that shaped Bonhoefferâ€¦Insightful and illuminating, this tome makes a powerful contribution to biography, history, and theology.'' --Publishers Weekly

''A welcome new biography of one of the twentieth century's leading lights. Metaxas magnificently captures the life of theologian and anti-Nazi activist Dietrich Bonhoeffer (1906-1945), who 'thought it the plain duty of the Christian-and the privilege and honor-to suffer with those who suffered.' In the finest treatment of the man since Eberhard Bethge's Dietrich Bonhoeffer: Man of Vision, Man of Courage (1970), Metaxas presents a complete, accessible picture of this important figure, whose story is inspiring, instructive, and international in scope. . . Metaxas rightly focuses on his subject's life, not his theology, though readers will learn plenty about his theology as well. The author makes liberal use of primary sources, which bring Bonhoeffer and other characters to vivid life. For the most part, Metaxas allows this epic story to play itself out, unhindered by commentary; where he does add his own voice, the conclusions are sage. A definitive Bonhoeffer biography for the twenty-first century.'' --Kirkus Reviews (starred review)
Posted by John Piippo at 1:53 PM