A Cruciformed Life: Don't Expect to Be Crowned With Glory By the World 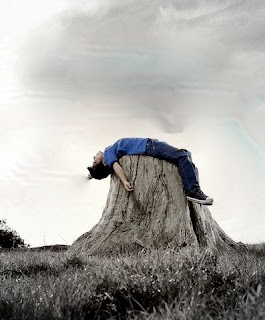 N.T. Wright writes: To begin with, you have to grasp the fact that Christian virtue isn’t about you—your happiness, your fulfillment, your self-realization. It’s about God and God’s kingdom, and your discovery of a genuine human existence by the paradoxical route—the route God himself took in Jesus Christ!—of giving yourself away, of generous love which constantly refuses to take center stage." (Wright, N. T., After You Believe: Why Christian Character Matters, p. 70).

One would be hard pressed to find this on "Christian TV," or in "Christian" media. Yet it is the heart of the Real Jesus and mere, un-Americanized Jesus-following.

Jesus told his followers to take up their cross daily and following. Read the Scriptures for yourself. Paul's letters to the Corinthians, especially the second one, is about Jesus' followers being paraded before the world as prisoners in a procession. (2 Cor. 2:12-17) I love what New Testament scholar David Garland says, in his commentary on 2 Corinthians, as he comments on 2 Cor. 2:12-17:

“Paul has incarnated his apostolic message of the cross of Christ. The cross determines both his message and his style of ministry, and those who preach Christ crucified cannot expect to be crowned with glory by the world which crucified him.” (146)
Posted by John Piippo at 12:37 PM