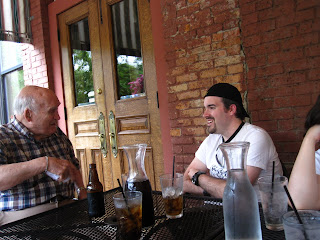 Henri Nouwen, in Spiritual Direction, writes of three things that were deepened in his heart as a result of his move to L'Arche and caring for handicapped people.

1. Being is more important than doing.

Nouwen writes: "God wants me to be with him and not do all sorts of things to prove I'm valuable." (44) God loves you, not for what you do, but for who you are; viz., his beloved son or daughter. Human loves are often performance-based. God's love is not. The distinction between the two is supremely important. Internalize this. Pray, Nouwen-like, "God, bring this truth that is in my mind into my heart."

2. The heart is more important than the mind.

Nouwen writes: "When you've come from an academic culture, that's hard to learn." (44) Nouwen was an academic who taught for two years at Notre Dame, ten years at Yale, and three years at Harvard. In his work with the mentally handicapped that he "saw that what makes a human being human is the heart with which one can give and received love... People with physical and mental disabilitiies easily can let their hearts speak and this reveal a mystical life unreachable by many intellectually astute people." (45)

Yes, we are to love God with our mind. But when Paul wrote this it was out of a culture that had not yet been Cartesianized. Hebrew culture does not make an absolute metaphysical distinction between "heart" and "mind." Jesus is after the human heart. Human "minds" vary greatly in ability. While God wants us to use whatever mental capacities we have for his glory, God can work through the heart of a mentally handicapped person. Mental assent to Jesus is not enough. But when the heart is captured, one's mental abilities are neither some special asset nor debilitating detriment to God.

At L'Arche Daybreak Nouwen lived ten years with Adam until he died. Nouwen writes: "Adam's story is my story of weakness, vulnerability, and dependency, but also of strength, authenticity, and giftedness." (46) Our non-tribal Western culture values autonomy more than community. Many of us have been trained by our culture to want to do thing by ourselves, even giving us the idea that we will do a better job if we do it alone.But when we work together, more people get to own the results. The more corporate ownership there is, the better "church" will be. Plus, as Nouwen says, there is much to be gained from others as we learn to collaborate. God uses collaborative, tribal activity to teach us things about ourself and others.

I worked at United Cerebral Palsy of Will County, Illinois for three years. The first year was between my Master's degree and the beginning of my Ph.D studies. Sandwiched between hyper-academia was a year of helping the physically and mentally handicapped. We did many things together, and the entire experience deepened in me love, understanding, and needed character development.
Posted by John Piippo at 11:29 PM