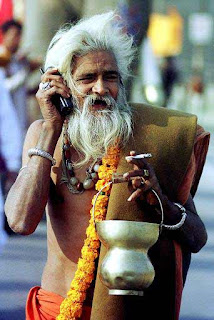 There is happening now a revival of piety and religiosity in India, a nation long-renowned for its openness to spiritual things. What is especially interesting is that India is becoming modernized. "The country is already on the verge of overtaking Japan to become the third-largest economy in the world, and, according to CIA estimates, the Indian economy is expected to overtake that of the United States by roughly 2050." (William Dalrymple, "Rush Hour for the Gods") This "modernization within India is also destroying the local and varied flavors of Hinduism, swiftly turning it into a single—ofttimes politicized—religion." Hinduism is losing its localized religious nuances and particularities and becoming standardized.

When Europe was industrially revolutionized one result was that religion was threatened. Not so in India. India's technological revolution is accompanied by an increase in interest in Hinduism, albeit a Hinduism that is for the masses, a "syndicated Hinduism." According to Indian historian Romila Thapar, "this homogenizing process is now accelerating: “The emergence of a powerful middle class,” she believes, has created a desire for a “uniform, monolithic Hinduism, created to serve its new requirements.” This new Hinduism masquerades as the revival of something ancient and traditional, but it is really “a new creation, created to support the claims of [Hindu] majoritarianism.”"

Dalrymple contrasts this with the Industrial Revolution in Europe. "In nineteenth-century Europe, industrialization and the mass migrations from farms and villages to the towns and cities went hand in hand with the death of God: organized religion began to decline and the church and state moved further and further apart. The experience of South Asia has been more or less the reverse of this."

So we find this interesting and intriguing thing of a technological revolution combining with a religious revolution in an already-hyper-"spiritual" nation. Globalization is making India richer and more materialistic, and more religious, with the religiousness becoming more political. Meera Nanda comments:

"As India is liberalising and globalising its economy, the country is experiencing a rising tide of popular Hinduism which is leaving no social segment and no public institution untouched. There is a surge in popular religiosity among the burgeoning and largely Hindu middle classes, as is evident from a boom in pilgrimage and the invention of new, more ostentatious rituals. This religiosity is being cultivated by the emerging state-temple-corporate complex that is replacing the more secular public institutions of the Nehruvian era . . . a new Hindu religiosity is getting more deeply embedded in everyday life, both in the private and public spheres."

One would think, following the example of Europe, that an increase in technology and wealth would lead to a religious downturn. Not only is there no religious downturn in India, there an upturn. But historic Hinduism is waning.
Posted by John Piippo at 2:39 PM