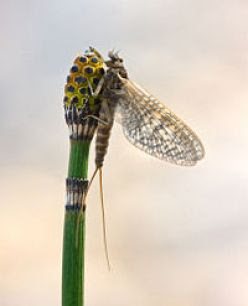 Monroe, Michigan (where I live) is a small community. Proof of this is the headline on our newspaper, which reads: "Monroe Invaded by Mayflies." In  contrast, the New York Times headline reads "Iran Fractures." While the world is crumbling around us our greatest concern in Monroe in mayflies.

Mayflies live near water - they are aquatic insects. Monroe is on Lake Erie. Therefore...

Once, years ago, my son Josh and some of his friends were camping at Sterling State Park, on the shores of Lake Erie. That night the mayflies hatched. Billions of them. Josh described the mayfly invasion as descending in biblical (Exodus-like) proportions. Mayflies landed upon them like a plague. One of Josh's friends resorted to punching them with his fists. One good strike on a mayfly's jaw and the thing is down for the count. Unfortunately, the deceased mayfly has a million siblings, and you've just killed their brother.

The lifespan of a mayfly varies from 30 minutes to one day. People who hate mayflies can take comfort in this, The mayfly that now irritates them will soon be lying in a coffin, mourned by its one billion dying siblings. "The primary function of the adult is reproduction; the mouthparts are vestigial, and the digestive system is filled with air." (See here, if you want to study mayflies.)

If, during the Great Mayfly Hatch Moses-esque Plague, you drive at night in downtown Monroe or, worse yet, in Luna Pier, the mayflies are as thick as snow. People literally shovel them off the sidewalks. Some years ago, feeling bored on a summer night, I asked Linda, "Want to go downtown and watch the mayflies?" She said, "No."

If you were a bug and had a day to live what would you do? A mayfly heads for a gas station and spends its life there, on the outside, looking in. Some get up close and personal with street lights. For a mayfly this defines "freedom." A mayfly's bucket list contains only one item: light.

Franz Kafka would love this. In Kafka's The Metamorphosis Gregor Samsa wakes up one morning to find out that he has morphed into a big bug. His parents freak out. Gregor's presence inspires disgust and fear. Gregor is confined to his room and eventually dies there. If you are an insect you do not fit in.

Some people's lives are, by their own choosing, the social equivalent of an insect's.