The Atonement as Entertainment 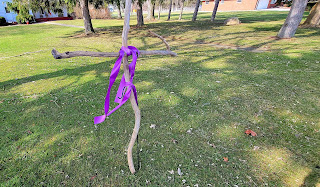 (Cross, on my front yard)

Fleming Rutledge, in The Crucifixion, writes:

"The mocking and jeering that accompanied crucifixion were not only allowed, they were part of the spectacle and were programmed into it. In a sense, crucifixion was a form of entertainment. Everyone understood that the specific role of the passersby was to exacerbate the dehumanization and degradation of the person who had been thus designated to be a spectacle. Crucifixion was cleverly designed — we might say diabolically designed — to be an almost theatrical enactment of the sadistic and inhumane impulses that lie within human beings. According to the Christian gospel, the Son of God voluntarily and purposefully absorbed all of that, drawing it into himself." (pp. 92-93)

So what about the crucifixion today, in this Age of Show Business? (See here. And here.)