My Encounter With an Angel 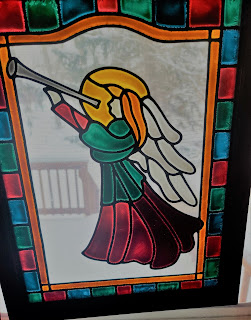 I believe in angels. Angels are non-physical persons who are messengers, helpers, emissaries, from God.

I have had angelic encounters. Here is one.

It happened in the early 1990s. I cannot remember the exact date. I was attending our annual denominational gathering. It was on the east coast, and a large convention center. Many were there. A thousand? Or more? I remember the large  auditorium being packed.

I was there representing Holy Spirit Renewal Ministries. I hosted a display table with HSRM materials. Occasionally, someone would come and look at the materials. I engaged a few in sharing about HSRM.

A young man came by. I guessed he was in his mid-twenties. He expressed interest in the Holy Spirit. He had long, wavy brown hair. He smiled at me as he talked. We had some kind of discussion about the Holy Spirit going. I don't remember the details. I do remember that he talked a lot. And smiled a lot. And stayed. He stayed for more than an hour.

I remember coming to a point where I was wishing he would leave. I know that's not the heart of Jesus. But that's where I was. Did he sense I had had enough of his company? I don't know.

Later that evening, in my hotel room, I began feeling bad about my attitude towards this young man. Then a Bible verse came into my mind. It was Hebrews 13:2.

Do not forget to show hospitality to strangers,

for by so doing some people have shown hospitality

to angels without knowing it.

I knew this verse from the King James Version.

Be not forgetful to entertain strangers:

for thereby some have entertained angels unawares.

I felt sad. I did not show hospitality to this young stranger. I found myself hoping I would see him tomorrow, the last day of the annual conference. I resolved that, should this happen, I would be hospitable.

The last day came. There was no sign of him. There were crowds of people in the auditorium. I had packed up the HSRM materials. I was making my way through the people, carrying my box, when, through the crowd, the young man came up to me. He reached out to shake my hand. He said nothing, until he walked away. That's when he turned around one last time, looked at me with that smile, and said these words:

"Don't forget what the Bible says about entertaining angels unaware."

With that, he walked into the crowd and was gone.

For a good book on angels - here.