Thoughts on Naturalism's Failure to Account for Objective Moral Values 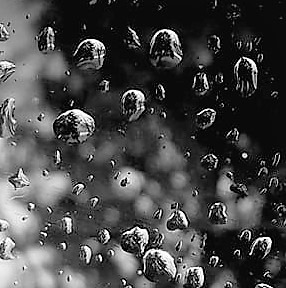 (Water beads on our window.)
In Western culture the two prominent worldviews are naturalism and theism. "Naturalism" is the view that "natural entities (i.e., entities that can be examined by the natural sciences) have only natural causes, and that there are no supernatural entities (e.g., there is no God)." (Chad Meister, "God and Evil," in Moreland et. al., Debating Christian Theism, p. 208)

"Naturalism" holds that nothing is real unless revealed by the natural sciences. All reality is only material reality. This is bad news for "value." On naturalism, morality is not real. At most (which isn't saying much), moral values supervene on physical matter. Which is another way of saying that moral values are nothing more than physical properties.

Consider this explanation of "supervenience."


"A set of properties A supervenes upon another set B just in case no two things can differ with respect to A-properties without also differing with respect to their B-properties. In slogan form, “there cannot be an A-difference without a B-difference”.
As we shall see, this slogan can be cashed out in many different ways. But to illustrate the basic idea, imagine that there is a perfect forger. Her copies of paintings not only fool the art dealers, but are in fact exact duplicates of the originals down to the precise placement of every molecule of pigment—indeed, down to every microphysical detail. Suppose that she produces such a copy of El Greco's A View of Toledo. It is of course different from the original in various respects—it is a forgery, it was not painted by El Greco, it is worth quite a bit less at Sotheby's, and so forth. But the forgery is also exactly like the original in other respects. It is the same shape, size, and weight. The surface of the canvas contains the same arrangements of colors and shapes—a blue rectangle here, a green swirl there. Indeed, it looks just the same, at least to a single viewer under identical lighting conditions and so forth. Perhaps it is even just as beautiful as the original, though that is more controversial.
The properties that the forgery is guaranteed to share with the original are those that supervene upon its microphysical properties. Two paintings that are microphysically just alike are guaranteed to be just alike in the arrangement of colors and shapes on their canvases. That is, you cannot change the arrangement of colors and shapes on a painting's canvas without changing its microphysical properties. This is just to say that the arrangement of colors and shapes supervenes on its microphysical properties."
- "Supervenience," Stanford Encyclopedia of Philosophy

For Dworkin, as for Nagel, naturalism cannot account for value. Moral values have an objective status that is irreducible to material reality. Dworkin argues for and “"accepts the full, independent reality of value and hence rejects the naturalistic view that nothing is real except what is revealed by the natural sciences or psychology."

Dworkin reasons that values exist in a fully independent, objective realm. (Sounds like Platonism.) "The realm of value is “self-certifying,” so the only evidence for the existence of values is the truth of the things that we say about them." This sounds like the Reformed epistemological position that moral values are "properly basic."

See Rosen's entire essay for a fuller explanation of Dworkin's book. And, of course, read the book itself. The interesting point for me is that, in Nagel and Dworkin, we see their frustration with naturalism's intrinsic inability to account for moral values, and their attempts to argue for such values as having an independent ontological status without reference to God. I doubt this can be done. Rosen wonders about this too, as he concludes:

"I cannot see that describing the target of our disagreements about value as existing in a fully independent, objective realm is anything more than religion lite: the religious idea of eternal goodness without the miraculous elements of omnipotent divine will and personal immortality. Yet I am at one with Dworkin in thinking that even a fully secular individual should contemplate the universe not just with curiosity and wonder but with reverence and gratitude. Still, behind me I hear a voice—a Nietzschean one, perhaps—that tells me that what Dworkin and I are looking at is no more than a penumbra, the few rays that remain in the sky after the sun of revealed religion has set. If that is so, then the coming night may be dark indeed." (That's epiphenomenalism.)