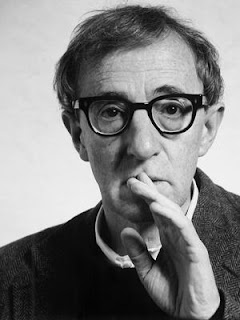 Linda and I have enjoyed, over the years, watching every movie Woody Allen ever made. He is so intrinsically funny and clever, and he brings to his movies a pervading existentialist dread that is philosophical and psychological.

I'm pointed to Allen this afternoon, as I'm sitting on our back deck reading more of Jim Holt's Why Does the World Exist?: An Existential Detective Story. Holt's very fun book is a quest to find some answer to THE BIG QUESTION, which is: Why is there something rather than nothing? This question is one of the few that has lit my path since encountering its force in the early 1970s, as a young philosophy major.

I just finished Chapter 11 - "The Ethical Requiredness of There Being Something." It's on philosopher John Leslie's theory of "axiarchism." And what might that be? The Greek word "axiology" is "the study of value. Goodness, in a Platonic sense, is responsible for there being something rather than nothing. This is axiarchism's answer to the BIG QUESTION.

In discussing 3 Holt brings in philosophers who doubt that the world is good. And, he mentions Woody Allen. Allen expresses his doubts that this world is good in an interview in Commonweal, in 2010. So, sitting on my back deck, I again discover some of the delightful goodness of our world which no longer needs to drive miles to a library, locate the edition of Commonweal in the periodicals section, and read. It's all online. I'm so historically interested in the filmmaking of Allen that I pull it up, while taking another sip of my Tim Horton's coffee (more evidence that our world is good).

Allen says that he makes films to give him "some kind of relief from the agony and terror of human existence."

"Human existence is a brutal experience to me…it’s a brutal, meaningless experience—an agonizing, meaningless experience with some oases, delight, some charm and peace, but these are just small oases. Overall, it is a brutal, brutal, terrible experience, and so it’s what can you do to alleviate the agony of the human condition, the human predicament? That is what interests me the most. I continue to make the films because the problem obsesses me all the time and it’s consistently on my mind and I’m consistently trying to alleviate the problem, and I think by making films as frequently as I do I get a chance to vent the problems. There is some relief. I have said this before in a facetious way, but it is not so facetious: I am a whiner. I do get a certain amount of solace from whining."

This world, Allen believes, is "overwhelmingly bleak." His films grant him and maybe some viewers a speck of relief in the vast darkness. Ultimately, his movies don't help at all. Life is "horrible," with a few "oases" here and there, like listening to a Mozart symphony. "Everybody knows how awful the world is and what a terrible situation it is and each person distorts it in a certain way that enables him to get through. Some people distort it with religious things. Some people distort it with sports, with money, with love, with art, and they all have their own nonsense about what makes it meaningful, and all but nothing makes it meaningful. These things definitely serve a certain function, but in the end they all fail to give life meaning and everyone goes to his grave in a meaningless way."

As much as I disagree with Allen's worldview, this is why I like him as well. He's dealing with the big questions, foremost among which is: What is the meaning of my life? Though I'm not an atheist, I admire his logic of atheism, which concludes that life has no meaning, ultimately, and that the shadow of this conclusion is cast over all of life and its ultimately trivial ways of unconsciously coping with this.

In Allen's movie "Whatever Works," the protagonist "murders his pregnant mistress and a bystander whose death he views as “collateral damage.” He explains to their ghosts that there is no justice in the universe because there is no Intelligence directing it. If there were no God, surely Allen’s extreme pessimism—and the extreme language in which he expresses it—would be right on target." (See "Woody's Cold Comforts," by Robert Lauder)

"Everyone," says Allen the thoughtful atheist, "goes to his grave in a meaningless way." (In Holt, 213) So true, if there is no God.
Posted by John Piippo at 7:23 PM