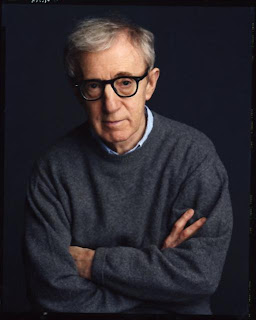 As I wrote in a previous post, I like Woody Allen. I have long admired his films. I'm an Ingmar Bergmann fan, too, and Allen is indebted to Bergmann. (See "Ingmar Bergman Slips Into the Darkness...")

Allen is (as Bergmann was) an atheist. He brings (as did Bergmann) his atheism into his films, overtly and covertly. Allen is not hiding the fact that: God does not exist (for Allen, not for me); therefore life is absurd, pointless. But of course. Any atheist who thinks otherwise is just another village atheist in denial. I find Allen's atheism honest and lived-out.

Some say your view is that life is pointless, and others say you're a romantic realist who believes in being true to yourself. Which is it?

Allen: "I think that's the best you can do, but the true situation is a hopeless one because nothing does last. If we reduce it absurdly for a moment, you know the sun will burn out. You know the universe is falling apart at a fantastically accelerating rate and that at some point there won't be anything at all. So whether you are Shakespeare or Beethoven or Michelangelo, your stuff's not going to last. So, given that, even if you were immortal, that time is going to come. Of course, you have to deal with a much more critical problem, which is that you're not going to last microscopically close to that. So, nothing does last. You do your things. One day some guy wakes up and gets the Times and says, "Hey, Woody Allen died. He keeled over in the shower singing. So, where do you want to have lunch today?""

"Such, in outline, but even more purposeless, more void of meaning, is the world which Science presents for our belief. Amid such a world, if anywhere, our ideals henceforward must find a home. That man is the product of causes which had no prevision of the end they were achieving; that his origin, his growth, his hopes and fears, his loves and his beliefs, are but the outcome of accidental collocations of atoms; that no fire, no heroism, no intensity of thought and feeling, can preserve an individual life beyond the grave; that all the labours of the ages, all the devotion, all the inspiration, all the noonday brightness of human genius, are destined to extinction in the vast death of the solar system, and that the whole temple of Man's achievement must inevitably be buried beneath the debris of a universe in ruins -- all these things, if not quite beyond dispute, are yet so nearly certain, that no philosophy which rejects them can hope to stand. Only within the scaffolding of these truths, only on the firm foundation of unyielding despair, can the soul's habitation henceforth be safely built."
Posted by John Piippo at 7:21 AM