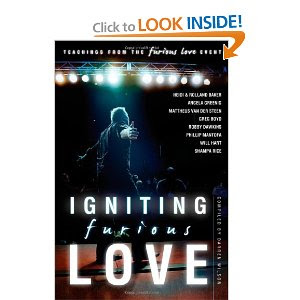 The book from our April 2011 "Furious Love" event has been published. You can get Igniting Furious Love: Teachings From the Furious Love Event at amazon.com.

TABLE OF CONTENTS
* It s All in the Delivery by Matteus Van Der Steen
* Called to Feed the Hungry by Heidi Baker
* Worldview Shakedown by Greg Boyd
* Raising the Dead by Rolland Baker
* I Will Get Him by Philip Mantofa
* Simply Love by Shampa Rice
* Witches, Babies, and Soldiers by Will Hart
* Stepping Stones by Angela Greenig
* Cradle to Coffin by Robby Dawkins
Posted by John Piippo at 4:31 PM