Creativity as (Literally) Thinking Outside the Box 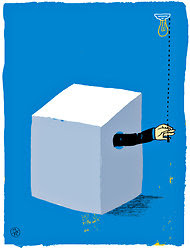 A main text for my doctoral dissertation on metaphor theory was Metaphors We Live By, by George Lakoff and Mark Johnson. This led me on a trail that was and remains about metaphor, and language, as embodied. The idea here is, as Zoltan Kovecses says, that "metaphorical language and thought arise from the basic bodily (sensorimotor) experience of human beings. As it turns out, this notion of "embodiment" very clearly sets off the cognitive linguistic view from the traditional ones." (Metaphor: A Practical Introduction, Kindle Locations 72-73)

I purchased Lakoff and Johnson's Philosophy in the Flesh : The Embodied Mind and Its Challenge to Western Thought, and Johnson's The Body in the Mind: The Bodily Basis of Meaning, Imagination, and Reason. The philosophy and linguistic theory that arises out of these texts is, obviously, anti-Cartesian. It's also, I think, Hebraic in the sense that we are embodied beings situated in space.

So I am today intrigued and impressed with Suntae Kim's (et. al.) little nytimes article "When Truisms Are True." They write:

"Recent advances in understanding what psychologists call “embodied cognition” indicate a surprisingly direct link between mind and body. It turns out that people draw on their bodily experiences in constructing their social reality. Studies show, for example, that someone holding a warm cup of coffee tends to perceive a stranger as having a “warmer” personality. Likewise when holding something heavy, people see things as more serious and important — more “weighty.” "

Bodily experiences help generate new ideas and solutions to problems. I can verify this in terms of preparing to preach. I take the text I'm preaching on and walk with it, usually for miles, meditating on the text, and stopping to write down the ideas as they sometimes come marching towards me in platoons.

"We asked 102 undergraduates at New York University to complete a task designed to measure innovative thinking. The task required them to generate a word (“tape,” for example) that related to each of three presented clue words (“measure,” “worm” and “video”). Some students were randomly assigned to do this while sitting inside a 125-cubic-foot box that we made of plastic pipe and cardboard. The rest got to sit and think outside (and next to) the box.

During the task we tracked the number of correct responses suggested by the students. We found that those thinking outside the box were significantly more creative: compared with those thinking inside the box, they came up with over 20 percent more creative solutions."
"Even the outline of a box can influence creativity."
Bodily experiences help create new knowledge. This makes sense on a Hebraic understanding of personhood, and undermines the Cartesian separation between mind and body.
The article links to Suntae's research. As I went there I was pleasantly suprised to find: Embodied Metaphors and Creative “Acts”.
Posted by John Piippo at 9:34 PM