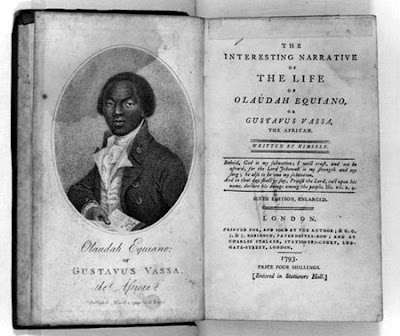 I'm reading Robert Kellemen's Beyond the Suffering: Embracing the Legacy of African American Soul Care and Spiritual Direction. One of the stories Kellemen shares is of a boy named Equiano. Equiano was born in 1745 in Benin, then known as Guinea. When he was just ten years old his life changed forever. Equiano wrote:

"One day, when all our people were gone out to their works as usual, and only I and my dear sister were left to mind the house, two men and a woman got over our walls, and in a moment seized us both; and, without giving us time to cry out, or make resistance, they stopped our mouths, tied our hands, and ran off with us to the nearest wood." (45) Eventually Equiano and his sister were separated and never saw each other again.

Equiano was placed on a slave ship. Sailing across the Atlantic, the majority of slaves died. Kellemen writes: "Captured Africans were spooned together lying on their sides in ships that pitched with every wave. Together they wept and moaned in a forced community that cut across tribal and cultural lines." (51)

Rice University professor Anthony Pinn "describes the bitter waters as the appalling transition from personhood to property. The Africans left Africa connected to family, community, and continent; they were reborn as chattel. They moved from capture to rupture, a ritual passage of rebirth from one reality to another. Dying to what was and what could have been, they were born into what never should have been." (51; from Pinn, Terror and Triumph, pp. 28-35)

Equiano wrote of his experience on one of these hell ships, as he feared he would be eaten as he was forced aboard. "I was not long suffered to indulge my grief; I was soon put down under the decks, and there I received such a salutation in my nostrils as I had never experienced in my life; so that with the loathsomeness of the stench, and crying together, I became so sick and low that I was not able to eat, nor had I the least desire to taste anything. I now wished for the last friend, Death, to relieve me." (In Ib., 51)

These words, written by a boy, should never have been. Where were the real followers of Jesus? (One real Jesus-follower, William Wilberforce (1759-1833), was to be born 14 years after Equiano's enslavement. Wilberforce died on 29 July 1833, shortly after the act to free slaves in the British empire passed through the House of Commons.)

Olaudah Equiano was transported along with 244 other slaves to Barbados, and then on the the British colony of Virginia. he eventually ended up in London, where he was involved in the abolitionist movement. He eventually wrote The Interesting Narrative of the Life of Olaudah Equiano, or Gustavus Vassa, The African Written by Himself. He closed his book with these words of counsel:

"I early accustomed myself to look at the hand of God in the minutest occurrence, and to learn from it a lesson of morality and religion; and in this light every circumstance I have related was to me of importance. After all, what makes any event important, unless by its observation we become better and wiser, and learn "to do justly, to love mercy, and to walk humbly before God!"" (Micah 6:8; quoted in Kellemen, 55)
Posted by John Piippo at 6:59 AM