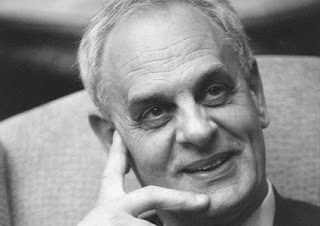 I read 10-15 books at a time. This has been my habit for the past 40 years. I pick up one book, read a chapter, put it down, simmer in it, then pick up another book, doing the same. I'm still marinating, slowly, in Marcello Pera's Why We Should Call Ourselves Christians: The Religious Roots of Free Societies. I picked it up tonight.

I am fascinated by Pera, a famous Italian philsopher and political leader. Here's why. Look at this quote:

"The rights of human beings are to liberals as the laws of nature are to scientists: once discovered (not invented) by someone at a certain time and place, they are valid for all and forever. But just as the laws of nature refer to an order inscribed in the world, the rights of human beings refer to a God who has stamped His image upon man. And this is clearly the Christian vision of God, creator of the natural and moral world." (p. 49)

"In order not to destroy society by deteriorating into license and violence, individual freedom requires limits: a sense of sinfulness, of what is forbidden, unthinkable, nonnegotiable. This limit cannot be established only by positive law, at whatever level (constitutional, international, etc.), because such a law could always be overridden. A moral, religious limit is needed, or one that is experienced as religious. The Christian limit is not putting oneself in God’s place but respecting His will, or not arousing the “wrath of God,” about which Jefferson spoke." (pp. 48-49)

What is intriguing about this is that Marcello Pera is an atheist. What explains this?

For Pera, a European political philosopher, Europe is well on the way, figuratively, to hell. The only thing that will save it is if Europe returns to its Christian roots. Does Pera, an atheist, believe in God and Jesus? No. But he does believe, he says, in the message of Jesus. We must live "as if God exists."

"The admirer of the Christian message is someone who believes that Christianity has changed the world, that it has brought about an unprecedented moral revolution of love, equality, and dignity, whose effects are still at work today. He believes that had this revolution never occurred, the world would be a far worse place; the life of man would be more savage, basic human rights without sufficient guarantee, and our prospects less hopeful. He also believes that the culture of Christianity is of great value to himself and to others; that it is a good unto itself." (p. 58) One must admit that this atheist has a different view than that of the raging "Four Horsemen."

"But all that is still not enough. Those who stop at believing that must not hold back from believing in. We must go beyond the rationalism that confines us to our calculations, beyond the positivism that binds us to the testimony of our senses, beyond the scientism that accepts only experimental proof. We must not allow our yearning for the divine and the sacred, our experience of mystery and the infinite to be purged from our inner life. We cannot be whole human beings without these dimensions. And we cannot be liberals of only one dimension." (p. 59)

Following Kant et. al., Pera knows that "It is morally necessary to assume the existence of God."
Posted by John Piippo at 10:32 PM