The Psychology of Atheism: Part IV 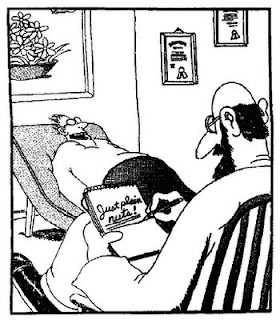 NYU psychologist Paul Vitz, in his presentation "The Psychology of Atheism," looks at deeper psychological reasons for atheism. (In Willard, A Place for Truth)

See my three previous posts on this here, here, and here.

Atheists have a psyche. Let's look into it! (At least theists can affirm that atheists have psyches. On atheism-as-philosophical naturalism nobody has a "psyche." Hence there can be no "psychology" of anything. Neurobiological explanations may be used, which have their own philosophical problems.)

Say "whew"... and thank God that this is not common (says Vitz, who doesn't find this kind of thing in his own counseling work)!

But what does this have to do with God? Freud took his Oedipus theory and said people link their own fathers with God. God, said Freud, is a "father figure and our attitude toward God and our father are very similar." (144)

Freud thought this explained God-belief. Vitz says it is not universal, as Freud thought. But, ironically, if Freud's eccentric Oedipus theory explains anything, it explains atheism. Vitz says:

"Since Freud proposed that God is a father figure, this suggests that we should all have an unconscious desire to kill God, to be independent of God, to have the world the way we want it. In a sense, what he's saying is that an atheist has an unresolved Oedipus complex because normally the father is too big to kill and the child can't get away with it. And so, instead of killing his father, the child identifies with the aggressor, his father, and represses these aggressive and sexual desires, which then remain unconscious." (144)

Freud thinks all of us have a desire to kill God. Vitz thinks Freud is on to something here. Vitz: "I would propose that atheism is an example of Oedipal wish fulfillment. That is, it's an unresolved Oedipus complex in the person." OK. But Vitz does not think "Oedipal wish fulfillment" is anywhere near "universal." So Vitz thinks we need to go deeper. This brings us to the "theory of the defective father."

I'll explain this in my next post. For now I cannot begin to tell you how many atheists I have met who seem to me to especially be reacting to their fathers.
Posted by John Piippo at 10:48 PM