The Psychology of Atheism: Part III 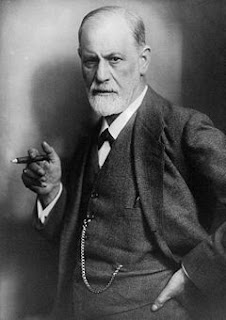 NYU psychologist Paul Vitz, in his presentation "The Psychology of Atheism," looks at deeper psychological reasons for atheism. (In Willard, A Place for Truth)

See my two previous posts on this here and here.

Vitz looks at the atheism of the psychologist Freud. Freud's atheism comes from what has been called the "projection theory" of German philosopher-theologian Ludwig Feuerbach. Vitz writes: "When Freud was writing his Future of an Illusion in the 1920s, he was updating Feuerbach." (142)

Feuerbach's theory is found in his The Essence of Christianity. Feuerbach wrote:
Elsewhere Vitz explains: "What Freud did with this argument was to revive it in a more eloquent form, and publish it at a later time when the audience desiring to hear such a theory was much larger. And, of course, somehow the findings and theory of psychoanalysis were implied as giving the theory strong support."

"Strangely enough, however, Freud has inadvertently given us a basic theory for understanding why people would not believe in God, why people would be atheists!" (In Willard, op. cit., 143) The projection theory cuts both ways. To understand this Vitz looks at the one idea Freud is famous for, and which is central to his theory: the "Oedipus Complex."

Next Psychology of Atheism post: Freud's Oedipus Complex & atheism as an example of Oedipal wish fulfillment.
Posted by John Piippo at 2:51 PM