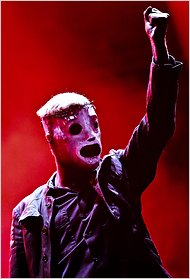 Today's nytimes has an article on Taylor's Oxford appearance. "After a childhood in which anything counted as a plausible mind-altering substance, including the Robitussin he and his friends used to guzzle in a practice they called robofrying, Mr. Taylor has not done drugs for many years, he said. Nor does he drink anymore, after numerous riotous alcohol-fueled experiences that did not always end well."

I agree with that. I've told a few of my guitar students over the years who wanted to be rock stars that "It won't happen. You're not good enough." And, it's OK. Once a university student told me their dream was to be a surgeon. I told them they weren't smart enough. I now confess that, at age 62, 5'10", and having ridden the bench in high school basketball, I still want to be an NBA player.

So Taylor is correct. But it doesn't strike me as an especially powerful message.

Why does Taylor wear a mask while performing with Slipknot? “When you put that mask on, you go places you would never imagine,” Mr. Taylor said. “It comes from a spot that’s uncomfortable and really dark.” He added: “The mask was a way to visualize everything I was feeling in my heart and my gut — all that pain I was holding on to. I didn’t have the worst childhood, but I didn’t have the best, and when you grow up like that, you have certain limitations invariably stuck inside you. Slipknot was a way to work it out.”


Taylor has a book coming out in July entitled: The Seven Deadly Sins: Settling the Argument Between Born Bad and Damaged Good. The amazon.com blurb describes it like this:

"For the first time, Slipknot and Stone Sour frontman Corey Taylor speaks directly to his fans and shares his worldview about life as a sinner. And Taylor knows how to sin. As a small-town hero in the early '90s, he threw himself into a fierce-drinking, drug-abusing, hard-loving, live-for-the moment life. Soon Taylor's music exploded, and he found himself rich, wanted, and on the road. His new and ever-more extreme lifestyle had an unexpected effect, however; for the first time, he began to actively think about what it meant to sin and whether sinning could--or should--be recast in a different light. Seven Deadly Sins is Taylor's personal story, but it's also a larger discussion of what it means to be seen as either a "good" person or a "bad" one. Yes, Corey Taylor has broken the law and hurt people, but, if sin is what makes us human, how wrong can it be?"

Oh no....  So if I choose to rape and kill Taylor's little daughter (should he have one) "how wrong can it be" if that's just who I am, if sin is what makes me human?

Taylor is an atheist, so I'd say for him there's no discussion here because there's no real "right" or "wrong." (Here's a rather poor atheistic article by Taylor. If you detest rampant misspellings and syntactic abominations you should not read it.)

From my Jesus POV sin does not make us human but is evidence of our subhumanity.

I wonder if Taylor's book defines "sin." Etymologically, it means "to miss the mark," as when an archer's arrow misses its target. But if atheism is true there's no target; hence no "sin."