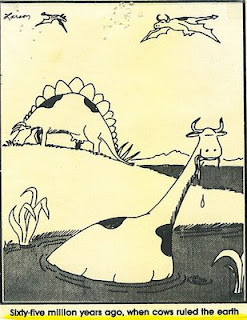 I smell a connection. Here it is, to be examined further: Plantinga's evo-argument against naturalism (the metaphysical [non-scientific] belief that "nature" is all there is) and "the argumentative theory of reasoning.

Alvin Plantinga's evolutionary argument against naturalism is this: P R/N&E is either low or inscrutable. That is, the probability (P) of trusting in our reason or rational capacities (R) on naturalistic evolution (N & E) is either low or inscrutable. If this is so, then we have a defeater for trust in our rational capacities. "If (naturalistic) evolution is true, then our cognitive faculties will have resulted from blind mechanisms like natural selection, working on sources of genetic variation such as random genetic mutation. And the ultimate purpose or function (Churchland's 'chore') of our cognitive faculties, if indeed they have a purpose or function, will be survival - of individual, species, gene, or genotype. But then it is unlikely that they have the production of true beliefs as a function. So the probability or our faculties' being reliable, given naturalistic evolution, would be fairly low."

Now see the recent article at nytimes.com, "Reason Seen More as Weapon Than Path to Truth." On evolutionary naturalism, "reason" did not evolve to discover "truth," but to win arguments.

"Rationality, by this yardstick (and irrationality too, but we’ll get to that) is nothing more or less than a servant of the hard-wired compulsion to triumph in the debating arena. According to this view, bias, lack of logic and other supposed flaws that pollute the stream of reason are instead social adaptations that enable one group to persuade (and defeat) another. Certitude works, however sharply it may depart from the truth." Reason evolved to win arguments, not to seek truth. "Truth and accuracy [are] beside the point."

"What is revolutionary about argumentative theory is that it presumes that since reason has a different purpose — to win over an opposing group — flawed reasoning is an adaptation in itself, useful for bolstering debating skills." Could evolutionary theorists be arguing for their theory simply to win an argument?

This is called "the argumentative theory of reasoning" and the recent Journal of Behaviorial and Brain Sciences dedicates the entire issue to its discussion. Plantinga's P R/N&E as low or inscrutable is supported by it. It will be interesting to follow the discussion.
Posted by John Piippo at 11:13 PM