The Man Who Believed in Hell 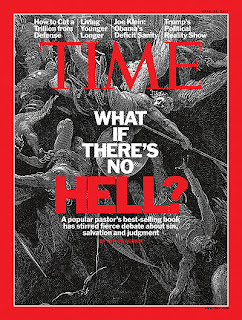 We subscribe to Time magazine. So we'll be getting the "Hell" issue in the mail today. The cover story is on Rob Bell's book Love Wins (which I read some weeks ago). The main essay is: "Is Hell Dead?"

The cover asks, "What if There's No Hell?" That is an unfortunate and sensationalist title chosen, I presume, to sell more magazines. Because Bell clearly believes in a hell and has said so many times. In fact, Bell has publicly confessed his belief in hell more than any fundamentalist I know of, so many times that he will ironically make his mark in history as "The Man Who Believed in Hell."

I think the Time article is way more sensationalist than substantive, putting a big media-driven spin on Bell's book. Very little of the essay actually deals with hell; most of it is on Rob Bell's life, upbringing, and so on.

Does Bell believe in hell? Here is, in summary, Bell's answer to the question of the reality of hell:

"There is also the reality of heaven and hell in the future. Our ultimate future hope is a restored creation under Christ where God will dwell with us forever on a restored heaven and earth [Rev 21-22]. There are many who accept the invitation of the life of heaven and many who reject the invitation. Those who reject the invitation experience a purifying “fire” of judgment in hell, yet there is hope. We live in the hope that the redemptive work of Christ is beyond what we can ask or imagine. Love Wins helps us bring a biblical imagination that leaves room for the hope of the redemption of all while recognizing humanity's free will to continue to reject God."

Note the following:
Is Bell's book a great book? I don't think so. A significant portion has Bell asking more questions after questions after questions than German theologian Hans Kung. Vagueness permeates the book, as I see it. In affirming "mystery" one does not have to write mysteriously. If you're going to write about mystery, write about it clearly. But perhaps Rob did not anticipate the response this not-so-clearly-written book would generate?

The main point of disagreement I have with Rob is his non-textually speculative idea that, in post-mortem life, non-Jesus-followers may be given much more time to choose to accept God and Jesus. At that point I think Rob leaves the biblical text he so wants to stay in touch with, his reasoning being a logical extension of his generous orthodoxy. This speculation logically makes one wonder about the relevance of believing in Jesus in this life, at least as such belief informs one's status in the afterlife. In terms of one's ultimate, eternal status before God being a Jesus-follower in this life is not a necessary condition. It may be sufficient, but clearly on Bell's reasoning it is not necessary.
(For all who want to educate themselves on hell see: Four Views on Hell.)
Posted by John Piippo at 8:52 AM