The Lead Codices: The Major Archaeological Discovery of Christian History? 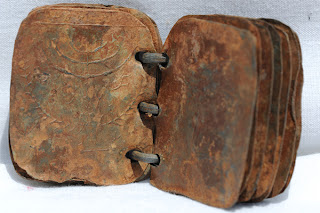 70 lead codices that appear to be from the first century have been found in eastern Jordan, an area where it is believed Jesus-followers fled after the destruction of the Temple in 70 A.D. Could they contain references to Jesus' death and resurrection?

"The codices are made up of wirebound individual pages, each roughly the size of a credit card. They contain a number of images and textual allusions to the Messiah, as well as some possible references to the crucifixion and resurrection. Some of the codices were sealed, prompting yet more breathless speculation that they could include the sealed book, shown only to the Messiah, mentioned in the Book of Revelation."

Wow. And OK. Because archaeology is replete with hoaxes and frauds.

See the BBC report here. In it we read: "Never has there been a discovery of relics on this scale from the early Christian movement, in its homeland and so early in its history."