Bertrand Russell - What Atheists Should Believe 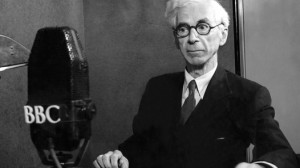 Tomorrow, in my MCCC Philosophy of Religion classes, I will introduce my students to the logic of atheism. Atheism is a worldview, with its own narrative.

Everyone has a worldview. No one is worldview-neutral.

To say that everyone has a "worldview" is to say that everyone has a set of beliefs that they hold as "true." "True" here means: true for everyone. That's the philosophic-logical understanding of propositions, or statements. A proposition, or statement, is a sentence that is either true or false. If it is true it is true for everyone; if it is false it is false for everyone. In logic there is no such thing as "true for me, but false for you." That's called the "subjectivist fallacy," and to commit it is to be irrational.

What, then, are the beliefs of atheism? Some (but not all) atheists have come forth with them. The famous British philosopher and atheist Bertrand Russell has done so, in his 1907 essay "A Free Man's Worship." I think Russell has done an admirable and logical job; i.e., were I an atheist I would believe the following four things.

1. Humanity is the product of causes that had no prevision of his appearing.
I am certain Russell is correct on this. If there is no Creator-God, then the universe and all that is in it is not some "creation," like every work of art has a creator-artist. If there is no Supreme Personal Agent who has made everything and is responsible for everything, and who is the cause of it all, then no one or no thing or no being "had us on their mind" when the universe began. Sometimes I hear someone who self-designates as an "atheist" and believes there is some reason or purpose for their existence. They don't realize that, on atheism, such thinking is nonsense. Humanity just is, for no reason.

2. Humanity is but the result of an accidental collocation of atoms.
A "collocation" is a "coming together," a "being located together," a "co"-"location." An "accidental collocation" is an unplanned, random "coming together." For example, I am writing this from my home office, located on the second floor of our house. I'm looking down on our front lawn, and leaves from one of our maple trees are scattered randomly. Why are the leaves scattered as they are? Not because an intelligent agent arranged or designed them that way. Purely natural conditions caused them to lie where they do. Beyond this, there is no meaning or purpose. Sometimes I read an atheist who believes their existence is more than some cosmic accident. But this is more nonsense. On atheism the formation of humanity is no more or greater than the random, accidental blowing of the leaves on my front lawn.

3. There is no personal existence after death.
Russell was once asked what he thought would happen to him after he dies. He responded, "I believe that when I die I shall rot, and nothing of my own ego will survive.”  (In Paul Edwards, “Great Minds: Bertrand Russell,” Free Inquiry, December 2004/January 2005, 46) If the worldview of atheism is true, then I am certain this logically follows. On atheism all that exists is matter (accidental collocations of atoms). There is no non-physical, non-material reality. Persons have no spiritual being or essence or "soul" or "mind" that survives physical death. Obviously, on atheism, "soul friends" don't exist. "You" and "I" simply will not be, on death.

4. All the heroism and human fire in the world cannot stop the fact that all man’s accomplishments will ultimately be destroyed and come to nothing in the vast heat-death of the universe.
According to physics, this is true. Of course, it's not going to happen tomorrow. Nonetheless, on atheism, it will happen. Nothing can stand in the way of Nature (Russell capitalizes it). I use this analogy to explain. Imagine life is a voyage on the Titanic. Imagine also that we know the fate of the Titanic, and that nothing can prevent it. We can choose to polish and rearrange the deck chairs if we desire to do so. But in the end all this labor will be undone. All heroic talk of "Let's make a better world" is, ultimately, futile. This atheistic fact has caused a number of atheists to despair (see especially atheistic existentialists)

For Russell, these four truths are certain. They form the pillars of a "temple" upon which humanity erects a scaffolding and dwells within. Russell writes: "Within the scaffolding of these truths, which are nearly certain and cannot reasonably be denied, humanity must build its temple for worship on a foundation of unyielding despair. (“Unyielding” refers to the inexorable destructiveness of Nature. "Despair" describes the emotion felt about the absurdity and meaninglessness of life.

For Russell, a “free man’s worship” amounts to this. Astoundingly, nature has produced “man” as a conscious and self-reflexive being. (Here is the matter of consciousness arising from unconscious matter, no less astounding today than it was in Russell's time.) Even though nature is and will do its horrific thing, in our minds we are free and should not bow to Nature (as Nietzsche calls us to do). This is our freedom in the face of the inevitable – free to create, act, live, be moral, rational agents.

So Russell is an early 20th-century atheistic "freethinker." Today, atheism has logically advanced; i.e., the belief system of atheism is more clearly seen. Now, on atheism, "freethinking" is absurd, since on atheistic physicalism (the only kind of atheism worth believing in) physical facts determine all facts. No one is "bright." How silly to claim so.
Posted by John Piippo at 8:17 PM