Nairobi, while on the equator, has a moderate climate - it's 6000 feet above sea level. Today was a beautiful 75 -80 degree day. Pastor Cliff Msioki picked Al and I up at the hotel and drove us to the place where, on August 7, 1998, the U.S. embassy in Kenya was bombed. It happened in downtown Nairobi, in a very congested area. 291 people were killed and 5,000 wounded. Responsible: al Qaeda. Now there is a memorial to those who died.

We then drove to Ongata Rongai outside Nairobi. Many of these roads have speed bumps the size of Mount Kenya. Literally, on some of them, your vehicle could get hung up and suspended. If it was dark and you were driving and didn't see them that is the end of your car's life mission (which is to transport you). On the way we stopped for a cup of coffee. And, I note, there are many, many Christian ministries and churches along this road.

New Life Mission is a beautiful and effective ministry to children, with a vibrant congregation. As we pulled in the worship was already happening. It was beautiful, powerful, and went on for a long time which, in some of our minds, is very good. "Three verses and we're outta here" is no longer for me. I'm a '7-11' worshiper - 7 verses sung 11 times. Or more. That's tribal, meditative, Hebraic worship, where the stuff gets a chance to sink into the heart. Better a 7-11 worshiper than a McWorshiper. Better one entire day of worship in God's courts than McWorship elsewhere.

After worship there was an offering, and a group of women sang a song as it was collected. Then - announcements. I'm guessing 700 people were there, many of them being young adults. 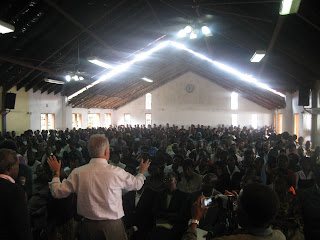 Cliff introduced me. I preached on the 2-fold methodology of Jesus, which is: proclaim and demonstrate. I told the people about prophecy, then demonstrated it with two people God had given me prophetic words for. Please note: 1 Corinthians 14:3 prophecy is to strengthen, encourage, and comfort. It was well received by these two people; they felt it was from God and for them. Then I told the story of Carl, the marathon runner in our church whose foot was broken and was healed (I've got the hospital records that show this). I asked, "Are there any marathon runners in Kenya?" There was a slight gasp in the people. That's like asking, "Is the pope Catholic?" Kenya is THE long-distance running center of the cosmos! I then made a joke (it seems funny to me). I said, "After church today, I challenge all of you to a long-distance running race." Many smiles among the people... Just kidding, I said.

I asked if there was anyone who had a problem with their feet. A young woman, Julia, raised her hand. She came forward. I explained to the people about "authority" (exousia), and how Jesus gives his followers authority. She had sprained her ankle multiple times and it was not getting better. I asked her what the pain level was on a scale of 1 to 10. "Eight," she said. I then said, "In Jesus' name, be healed." "How is your pain now?" I asked? Julia said "Zero." And immediately as she said "zero," before the people could begin toclap and praise God, there was a "pop" as a ceiling light broke, shattered, and fell to the ground right next to this woman and myself. The people erupted in praise and wonder. I told them that I felt the timing of this light popping (which Cliff said has never happened before) was absolutely perfect. It gave an exclamation point to the healing of Julia's foot. That, I believe, was God. Now there was this increased sense of expectation in all our hearts because God was in the house.


A lot more things happened. Al and I and Cliff prayed over many people, for healing and greater impartation of authority, power, and love.

Afterwards, on the drive back to our hotel, we:
Back in my hotel I crashed. There came a knock on the door - it was Al. He had not taken a nap. Actually, I wouldn't call what I was doing "napping," which has a connotation of lightness about it. I was in comatose hibernation mode (CHM). I'm sure I looked disoriented when I opened the door for Al since I was disoriented. At least I was "authentic."
Posted by John Piippo at 2:22 PM