Hawking on the Weak Anthropic Principle 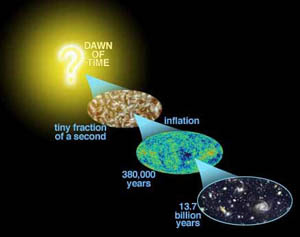 (In my philosophy of religion class today one of my students presented the anthropic principle objection to the fine-tuning argument. The version I am using (Robin Collins) is not subject to that criticism. Nevertheless, here's Stephen Hawking on the WAP - this is a re-post.)

But before this, a heads-up...

On WAP, see here, e.g.: "Suppose we imagine some process that produces an ensemble of a large number of universes with widely varying properties or even physical laws. What the weak anthropic principle points out is that only those members of the ensemble that are constructed so as to admit the production of intelligent life at some stage in their evolution will ever be the subject of cosmological enquiry. The fact that we are observers means that, if the production of life is at all a rare event, any universe that we can see is virtually guaranteed to display bizarre and apparently improbable coincidences."

The "strong anthropic principle" (SAP) argues that the fine-tuning coincidences ("anthropic coincidences") are more than coincidences; instead, "the universe must be such as to admit the production of intelligent life at some time." (See here.) "In this sense, the act of the observer is necessary in order to bring the universe into being at all." (Ib.)


There is a sound scientific explanation for the making of our world—no gods required.

By STEPHEN HAWKING And LEONARD MLODINOW

According to Viking mythology, eclipses occur when two wolves, Skoll and Hati, catch the sun or moon. At the onset of an eclipse people would make lots of noise, hoping to scare the wolves away. After some time, people must have noticed that the eclipses ended regardless of whether they ran around banging on pots.

Ignorance of nature's ways led people in ancient times to postulate many myths in an effort to make sense of their world. But eventually, people turned to philosophy, that is, to the use of reason—with a good dose of intuition—to decipher their universe. Today we use reason, mathematics and experimental test—in other words, modern science.

.Newton believed that our strangely habitable solar system did not "arise out of chaos by the mere laws of nature." Instead, he maintained that the order in the universe was "created by God at first and conserved by him to this Day in the same state and condition." The discovery recently of the extreme fine-tuning of so many laws of nature could lead some back to the idea that this grand design is the work of some grand Designer. Yet the latest advances in cosmology explain why the laws of the universe seem tailor-made for humans, without the need for a benevolent creator.

Many improbable occurrences conspired to create Earth's human-friendly design, and they would indeed be puzzling if ours were the only solar system in the universe. But today we know of hundreds of other solar systems, and few doubt that there exist countless more among the billions of stars in our galaxy. Planets of all sorts exist, and obviously, when the beings on a planet that supports life examine the world around them, they are bound to find that their environment satisfies the conditions they require to exist.

It is possible to turn that last statement into a scientific principle: The fact of our being restricts the characteristics of the kind of environment in which we find ourselves. For example, if we did not know the distance from the Earth to the sun, the fact that beings like us exist would allow us to put bounds on how small or great the Earth-sun separation could be. We need liquid water to exist, and if the Earth were too close, it would all boil off; if it were too far, it would freeze. That principle is called the "weak" anthropic principle.

The weak anthropic principle is not very controversial. But there is a stronger form that is regarded with disdain among some physicists. The strong anthropic principle suggests that the fact that we exist imposes constraints, not just on our environment, but on the possible form and content of the laws of nature themselves.

The idea arose because it is not only the peculiar characteristics of our solar system that seem oddly conducive to the development of human life, but also the characteristics of our entire universe—and its laws. They appear to have a design that is both tailor-made to support us and, if we are to exist, leaves little room for alteration. That is much more difficult to explain.

The tale of how the primordial universe of hydrogen, helium and a bit of lithium evolved to a universe harboring at least one world with intelligent life like us is a tale of many chapters. The forces of nature had to be such that heavier elements—especially carbon—could be produced from the primordial elements, and remain stable for at least billions of years. Those heavy elements were formed in the furnaces we call stars, so the forces first had to allow stars and galaxies to form. Those in turn grew from the seeds of tiny inhomogeneities in the early universe.

Even all that is not enough: The dynamics of the stars had to be such that some would eventually explode, precisely in a way that could disperse the heavier elements through space. In addition, the laws of nature had to dictate that those remnants could recondense into a new generation of stars, these surrounded by planets incorporating the newly formed heavy elements.

By examining the model universes we generate when the theories of physics are altered in certain ways, one can study the effect of changes to physical law in a methodical manner. Such calculations show that a change of as little as 0.5% in the strength of the strong nuclear force, or 4% in the electric force, would destroy either nearly all carbon or all oxygen in every star, and hence the possibility of life as we know it. Also, most of the fundamental constants appearing in our theories appear fine-tuned in the sense that if they were altered by only modest amounts, the universe would be qualitatively different, and in many cases unsuitable for the development of life. For example, if protons were 0.2% heavier, they would decay into neutrons, destabilizing atoms.

If one assumes that a few hundred million years in stable orbit is necessary for planetary life to evolve, the number of space dimensions is also fixed by our existence. That is because, according to the laws of gravity, it is only in three dimensions that stable elliptical orbits are possible. In any but three dimensions even a small disturbance, such as that produced by the pull of the other planets, would send a planet off its circular orbit, and cause it to spiral either into or away from the sun.

The emergence of the complex structures capable of supporting intelligent observers seems to be very fragile. The laws of nature form a system that is extremely fine-tuned. What can we make of these coincidences? Luck in the precise form and nature of fundamental physical law is a different kind of luck from the luck we find in environmental factors. It raises the natural question of why it is that way.

Many people would like us to use these coincidences as evidence of the work of God. The idea that the universe was designed to accommodate mankind appears in theologies and mythologies dating from thousands of years ago. In Western culture the Old Testament contains the idea of providential design, but the traditional Christian viewpoint was also greatly influenced by Aristotle, who believed "in an intelligent natural world that functions according to some deliberate design."

That is not the answer of modern science. As recent advances in cosmology suggest, the laws of gravity and quantum theory allow universes to appear spontaneously from nothing. Spontaneous creation is the reason there is something rather than nothing, why the universe exists, why we exist. It is not necessary to invoke God to light the blue touch paper and set the universe going.

Our universe seems to be one of many, each with different laws. That multiverse idea is not a notion invented to account for the miracle of fine tuning. It is a consequence predicted by many theories in modern cosmology. If it is true it reduces the strong anthropic principle to the weak one, putting the fine tunings of physical law on the same footing as the environmental factors, for it means that our cosmic habitat—now the entire observable universe—is just one of many.

Each universe has many possible histories and many possible states. Only a very few would allow creatures like us to exist. Although we are puny and insignificant on the scale of the cosmos, this makes us in a sense the lords of creation.