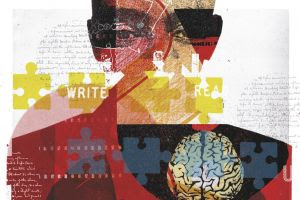 David E. Meyer, professor of psychology at the University of Michigan at Ann Arbor, argues that multitasking degrades performance. Multitasking has its cognitive costs. Therefore, pay "attention diligently to just one stream of input."

Stanford's Clifford Nass, and colleagues, have shown that "chronic media multitaskers—people who spent several hours a day juggling multiple screen tasks—performed worse than otherwise similar peers on analytic questions drawn from the LSAT. He isn't sure which way the causation runs here: It might be that media multitaskers are hyperdistractible people who always would have done poorly on LSAT questions, even in the pre-Internet era. But he worries that media multitasking might actually be destroying students' capacity for reasoning."

That's why I, like U-Michigan's Meyers, have written on our syllabi: "Thou shalt have no electronic devices in class." Because we like to teach, in order that our students might learn.

Apply the same to life in the Spirit, and prayer, and learning Christ.
Posted by John Piippo at 7:21 AM