Rehabbing from Surgery with Four Books 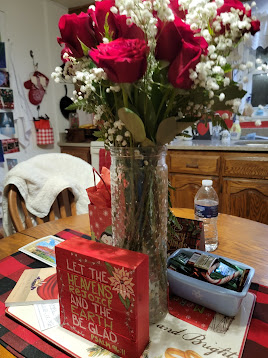 (I got these for Linda.)

I had surgery this past Tuesday for a total hip replacement. I was released from the hospital on Thursday. I'm now home, rehabbing. Linda is helping me - she is incredible!

This time provides opportunities to read. For Christmas I received four books. Two of them fuel my cosmic wonder, as expressed in Psalm 8:4-8.

what is mankind that you are mindful of them,
human beings that you care for them?

5 You have made them a little lower than the angels
and crowned them with glory and honor.
6 You made them rulers over the works of your hands;
you put everything under their feet:
7 all flocks and herds,
and the animals of the wild,
8 the birds in the sky,
and the fish in the sea,
all that swim the paths of the seas.

The first is Return of the God Hypothesis: Three Scientific Discoveries that Reveal the Mind Behind the Universe, by philosopher of science Stephen Meyer. The second is by astrophysicist Katie Mack, The End of Everything (Astrophysically Speaking).

The third gift book is Divine Impassibility: Four Views of God's Emotions and Suffering, edited by Robert J. Matz and A. Chadwick Thornhill. This book addresses these questions. Does God suffer? Does God experience emotions? Does God change? How should we interpret passages of Scripture that seem to support one view or the other? And where does the incarnation and Christ's suffering on the cross fit into this?

The fourth book I'm getting into is Still Time to Care: What We Can Learn from the Church's Failed Attempt to Cure Homosexuality, by Greg Johnson. What attracted me to this book were the reviews, by these authors I respect.

Becket Cook, Author of A Change of Affection: A Gay Man’s Incredible Story of Redemption and host of The Becket Cook Show on YouTube

"This fascinating book gives a thorough and enlightening account of how the evangelical church has historically mishandled and hurt gay and lesbian Christians. The damage done over the last forty years is eye-opening. Greg Johnson lays out a healthy path forward for the church regarding the LGBTQ community that is both biblical and pastoral. Every Christian (especially leaders in the church) needs to read this book in order to better understand this nuanced and complex issue."

David Bennett, speaker and writer, author of A War of Loves: The Unexpected Story of a Gay Activist Discovering Jesus

"Many critiques of the ex-gay world and its theology have been leveraged by those who take its radical opposite position. Greg Johnson is different. He is one who has fought to remain close to the Lord and obedience to His Word and yet to challenge ex-gay theology, dismantle its harm and face its complicated and flawed humanity. In this rare window into an experience that requires greater understanding, Greg points compassionately and critically to the greater hope of the Gospel and the deeper third way that Jesus provides for the LGBTQI+ community in a world addicted to ideoiogical certainty and harmful culture war divides. A must-read."

Wesley Hill, author of Washed and Waiting and Spiritual Friendship

"This book is a lament for an evangelical road not taken, as well as a clarion call from a prophetic insider who believes that evangelicalism can change. Anyone wanting to understand better the current evangelical debates around LGBTQ+ issues—from 'ex-gay' ministries, to 'Side B gay Christians,' to 'mixed-orientation marriages'—should read this book and consider the courageous witness of its author."

"Greg Johnson offers a fascinating look into the rise of the ex-gay movement and the reasons for a diminished ex-gay narrative today. He takes the reader back in history to key voices evangelicals admired to move the reader forward into a vision of biblical faithfulness and nuanced pastoral care and communal support for those who are both gay and Christian.”