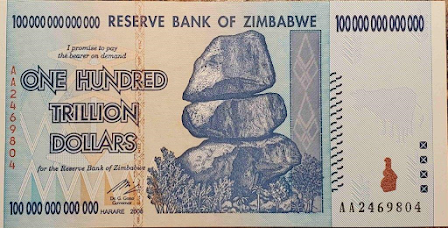 My friend John Russell began his construction business with only a wheel barrow when he was forty-six years old. I met him years later in France at the wedding of a mutual friend.

I learned John had given his life to Jesus years before. At that time, John’s construction business was the largest and most successful in the nation of Zimbabwe (Rhodesia, during colonial days). A year later,  while we lived in Zimbabwe, I traded John currency: my U.S. dollars for his Zimbabwe dollars. John did this because a Zimbabwe dollar was worthless outside the country. John was a wealthy man, but once he crossed the border, he was penniless without those U.S. dollars.

I learned many things from John Russell. But one lesson has been supremely more valuable than the others. You see, John was materially invested in Zimbabwe. His earthly wealth was only good within those borders. As John explained his predicament, he helped me realize the only unperishable investment is in the Kingdom of God. What possessions we have here are worthless outside earthly borders. We must trade our worldly possessions for eternal currency.

John went to be with Jesus in October 1993, with a soul rich in the attributes of his Master. By 2009, Zimbabwe’s currency spiraled to extinction, being worth less than the paper it was printed on. I have a real bank note from the days just before Zimbabwe had to switch to other international currencies (among them the US dollar). Its face value is one hundred trillion Zimbabwe dollars, and is only a curiosity today.