Jesus and the Currency Exchange 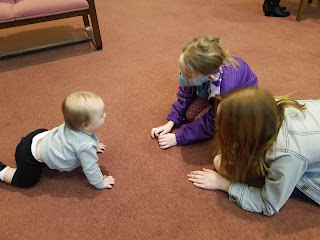 (My grandson Levi, with two of our Redeemer kids.)

This morning, in my alone-time with God, I continue slow-reading through the Gospel of Matthew.

Jesus entered the temple courts and drove out all who were buying and selling there. He overturned the tables of the money changers and the benches of those selling doves. “ It is written,” he said to them, “ ‘ My house will be called a house of prayer,’ but you are making it ‘a den of robbers.’

I clicked on Craig Keener's commentary (NIV Cultural Backgrounds Study Bible). And I learned something I had never thought of.

"If merely prophesying the temple’s demise could stir the temple authorities to hostile action (Jer 26: 11; Josephus, Wars 6.300– 9), it is not surprising that within a week of this incident Jesus was executed. Because Passover pilgrims came from all over the ancient world and each locality had its own special currency, money changers were necessary before people could buy sacrifices in the temple. Those who traveled from far away could not bring their own sacrifices, but would have to buy sacrifices at the temple. The issue is not the service provided but the location, as verse 13 makes clear. Jesus was not interfering with the massive tourist trade or other merchants outside the temple; his concern was with the distraction in the temple courts."

I thought of returning to the U.S. after being out of country. Sometimes, I still was carrying foreign money. So, I would go to the currency exchange.

That's what was set up in the temple area.

The currency exchange was a good thing. To locate the exchange in the temple courts was not a good thing. Because those areas were holy, set apart for praying.