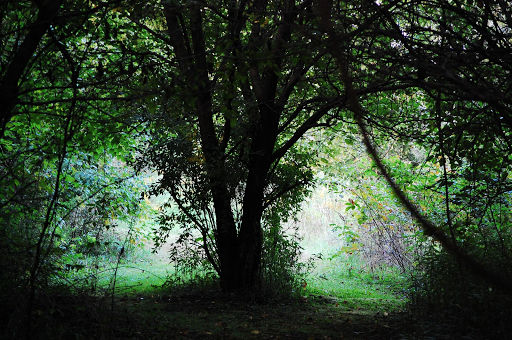 Adam and Eve were both naked.

And they felt no shame.

I've had a couple of surgical procedures in my life that required me to be in an operating room. One was having my diseased gall bladder removed.

I remember being awake as I was brought into the room. The entire space was filled with light. Around me, I saw no darkness at all.

I am thankful the surgeon and technicians did the operation in the light. The light would reveal anything in me that was dangerous. In the light, disease gets exposed.

Darkness, on the other hand, is the place of hiding and deception.

and pleasing to the eye,

and also desirable for gaining wisdom,

she took some and ate it.

She also gave some to her husband, who was with her,

and he ate it.

Then the eyes of both of them were opened,

and they realized they were naked;

so they sewed fig leaves together and made coverings for themselves.

as he was walking in the garden in the cool of the day,

and they hid from the Lord God

among the trees of the garden.

Shame beckons people to hide. Shame's environment is darkness. This is a spiritual darkness, a breeding ground of Satan, who tempts shame-filled people to sin in order to cover up their shame. Which, hellishly, gives birth to yet more shame; which inclines the shame-diseased person to sin to cover up shame; which produces more shame..., hence more deception....

It's the age-old battle between light and darkness. It's binary. This is not about "shades of gray." That idea is postmodern nonsense.

As a follower of Jesus, I know that Jesus is not ashamed of me. He calls me out of darkness, into his marvelous light. I want to be in the light. I want to be exposed, so that any darkness in me will be revealed and surgically removed by the Great Physician. Search me, O God, and know my heart!

This is the message we have heard from him

and declare to you:

in him there is no darkness at all.

God has taken my shame, and called me by a new name.

If we walk in the light,

as he is in the light,

we have fellowship with one another,

and the blood of Jesus, his Son,

purifies us from all sin.

I now release you from the self-perpetuating cycle of shame.

You belong to the Light, not to the darkness.