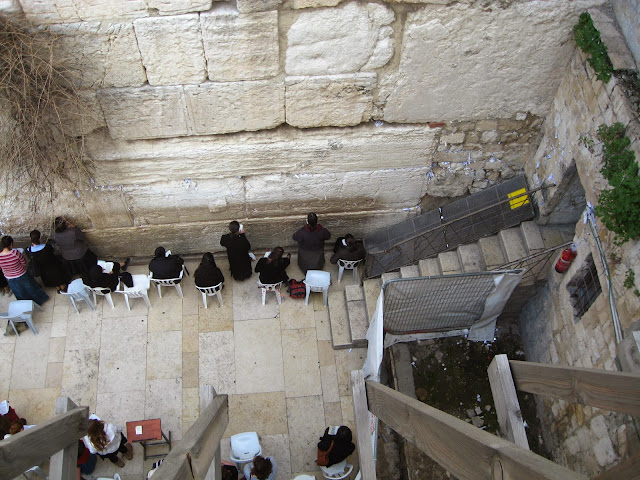 (I took this photo of the Wailing Wall in Jerusalem.)
From 1981 - 1992 Linda and I were campus pastors at Michigan State University. The campus is sprawling and beautiful. It hosts many botanical gardens. We loved riding bikes and walking on the miles of paths.
I remember something that caught our attention as we were on campus. We were walking up an incline. Ahead of us, on top of the hill, a young man was standing, with his back to us. His eyes were fixed on something on the other side of the hill. As we got to the top we saw, below in the valley, two German shepherds. They were sitting, their bodies frozen like statues, their eyes locking with the eyes of their master.
Then, the master said, "Come!" The two German shepherds raced up the hill and sat at their master's feet.
I have never forgotten this scene of the obedient dogs and their trainer. Nothing was going to move the dogs, except the master's command.
In 1 Corinthians chapter 15 the apostle Paul writes of the defeat of death and the victory inherent in the resurrection.

When the perishable has been clothed with the imperishable, and the mortal with immortality, then the saying that is written will come true: “Death has been swallowed up in victory.”

56 The sting of death is sin, and the power of sin is the law. 57 But thanks be to God! He gives us the victory

through our Lord Jesus Christ.

Since we already have the victory, Paul instructs us to be immovable.

58 Therefore, my dear brothers and sisters,

Let nothing move you.

Always give yourselves fully to the work of the Lord,

because you know that your labor in the Lord

is not in vain.

Lock your eyes on the eyes of Jesus.

Let nothing move you, except the voice of your Master.

Stay Connected
Stay Focused
Posted by John Piippo at 8:46 AM