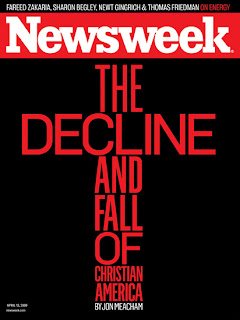 Ben Witherington, in a blog post yesterday, writes: "I do think that because of the increasingly secular direction of our culture, our cultural situation is becoming more like that of the earliest Christians."

In North America and Europe we live in a post-Christian culture.

The locus of Christianity has shifted, as Philip Jenkins has told us, from Europe and America to Africa, and then Asia.

Even though many in America say they believe in God, the air they breathe is godless.

From a Jesus POV this is not necessarily bad. Because a whole lot of what has been called "Christianity" in America was never really that; e.g., the many narrow fundamentalisms like King James onlyism; like reading and preaching from the Bible without contextualizing it; and so on. Out of the ashes of folk-Christianity and post-Christianity, authentic Jesus-following can arise. We may see the beginnings of this now happening in Europe. (Marcello Pera, e.g.)

And, BTW, post-Christianity does not mean and will never mean post-spirituality. The Big Questions have not been and will never be extricated from the human heart.
Posted by John Piippo at 8:50 AM