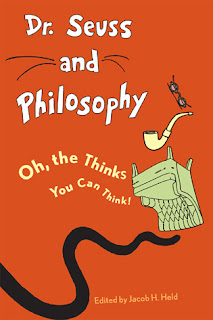 I just read the newest Dr. Seuss book - The Bippolo Seed and Other Lost Stories. I love everything about Seuss - the artwork, the colors, the characters, and the story. These stories are typical Seuss' morality plays. Here's a synopsis. 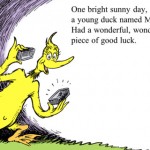 “The Bippolo Seed”
This is the tale of a duck that lives a simple lifestyle but gets very, very greedy.  The moral: Greed is not good.


“The Rabbit, the Bear, and the Zinniga-Zanniga.”
A giant bear with huge teeth and claws is about to clamp down on a tiny rabbit. The rabbit begins to out-think the bear. Rabbit points out that the bear has 10 eyelashes over one eye and only nine over the other eye. This is serious, since the weight of the extra eye lash causes the bear to be lop-sided. The rabbit begins to seriously get inside the head of the bear. It all goes downhill for the bear as he begins to experience serious psychosomatic symptoms. The rabbit then turns into a medical quack who convinces the ignorant and gullible bear that he needs to climb a Zinniga-Zanniga tree, pick one of its flowers, and hold it to its eye for “a couple of hours.” The bear does. The rabbit runs, laughing all the way. The moral: Brains overpower brawn. 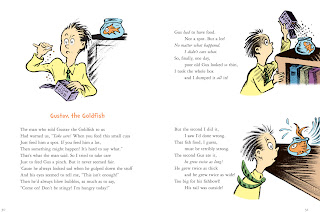 “Gustav, the Goldfish”
A boy doesn’t follow instructions and over-feeds his goldfish.  The little fish grows to the size of a whale, in just a few minutes. The morale:  never disobey.


“Tadd and Todd”
Tadd and Todd are twins who look exactly alike, but Todd is happy and Tadd is filled with angst. Tadd does not want to be an identical twin. So, in a truly proleptic move, Tadd dies his hair red! Todd follows suit. This irritates Tadd, since he wants to be different.  Tadd makes a false tail “which he hitched on behind,” puts a rose on his toe, and catches a “queer bird.”  Plus he acquires a whole lot of other things.  Has Tadd been reading Heidegger's Identitat und Differenz? The moral: accept who you are. 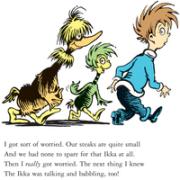 “Steak for Supper”
A boy strolls down Mulberry Street, heading home, when he realizes it is Saturday night, and his family always has steak on Saturday nights. He’s so excited that he shouts out this piece of information. He then remembers that his father has told to “button his lip” in public, “for you can never tell who might hear what you say.” Too late! An Ikka heard, and begins to follow him home for steak. The Ikka opens his mouth and spills the steak to a Gritch, who joins the parade.  Then, a Grickle.  Then a Nupper, and a pair of Wild Wheef. “All because I’d said, “Steak, every Saturday night!” If you’re a character in a Dr. Seuss book and you disobey the rules, dire, catatrophic, slippery-slope consequences follow! The moral: think before you speak.


“The Strange Shirt Spot”
I looked forward to meeting this, since the title sounds like something I can strongly relate to. Right away we begin with a warning: Mother has said, “Stay out of the dirt. But there I was with a spot on my shirt!” This, to the boy, is as serious as being discovered that one is an ax-murderer.  He rubs the spot with a towel, and it comes off the shirt. But then it’s on the towel. He washes the towel in the tub, and the spot remains on the tub.  This is the spot from hell! “What kind of spot was this spot I had found?”  Things get worse from here on. The moral: Listen to your parents. 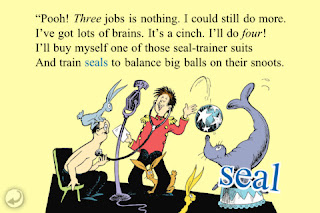 “The Great Henry McBride”
A boy sitting under a tree, pondering what he might be when he grows up. His first thought – I’ll be a famer and raise giant rabbits. But that limits his possibilities. He could do this plus be a doctor, too. Here the boy loses all touch with reality, since real doctors have no time to do anything else in life. “But why only two things…? Say! I could do three!” This is the madness of multi-tasking before its time. The boy could farm and raise giant rabbits, be a physician, and a radio broadcaster all at the same time. But guess what? Why not do four?  And more? The moral: it's OK to daydream when you're a kid. 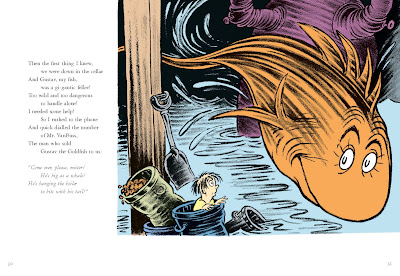