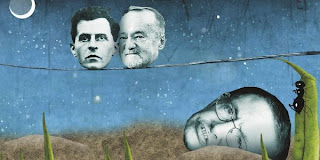 Philosopher Carlin Romano has a nice article on Hawking and Mlodinow's The Grand Design in The Chronicle of Higher Education ("Cosmology, Cambridge Style: Wittgenstein, Toulmin, and Hawking"). The bullet points are...
I found Romano's entire essay worth reading, and especially fascinating to me, reminding me of Dr. Brown's use of Wittgenstein and Toulmin as regards the history of science.
Posted by John Piippo at 12:06 PM