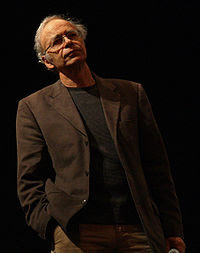 (For my MCCC Logic students)

Today I was invited to travel to Wayne State University to listen to Peter Singer speak. I would have loved to do that, but my schedule did not permit it. When I came to my Logic class this evening I thought I'd use Singer's reasoning from his atheist worldview as an example of good logical thinking. In this regard Peter Singer is someone I admire. I am not an atheist, so obviously I'm in disagreement with Singer about his worldview. But were I an atheist I'd be listening to Singer's reasoning. What I admire about Singer (and other Nietzschean-type atheists) is their logic of atheism. For example, here atheist Richard Dawkins refers to Singer as having "one of the most logically thought-out ethical systems in the world."

In this interview with Dawkins Singer states that not all human beings have a right to life. Watch the entire interview to see what he means by that and how he arrives at that controversial conclusion. Which, by the way, Dawkins finds supremely logical. Singer also clarifies what he means by referring to humans as essentially and only "animals." He also talks about what is "special" about humans and what is not "special" about humans. Singer says we must get over the idea "that we are an especially created species."

Atheism is a worldview. As such, certain thoughts logically follow. For example, it follows, on atheism, that there is no Creator God. Really, this is evident by definition. If there is no Creator-God, then there is no "creation." Note, then, that an atheist who talks about nature as a "creation" has borrowed an idea from theism that does not fit within atheism.

Philosophical naturalism also fits within atheism. Which means: "nature" is all that there is. There are no non-natural or super-natural events.

With nature being all there is, Singer's thinking about humans seems to follow logically. Dinesh D-Souza describes this as follows.

Singer "argues that we are not creations of God but rather mere Darwinian primates. We exist on an unbroken continuum with animals. Christianity, he says, arbitrarily separated man and animal, placing human life on a pedestal and consigning the animals to the status of tools for human well-being. Now, Singer says, we must remove Homo sapiens from this privileged position and restore the natural order. This translates into more rights for animals and less special treatment for human beings. There is a grim consistency in Singer's call to extend rights to the apes while removing traditional protections for unwanted children, people with mental disabilities, and the noncontributing elderly."

Note that, for Singer, not to do this is to be guilty of "specieism" (a term he helped popularize). At the end of the Dawkins interview Singer defines "speciesism" as "an attitude of prejudice towards beings because they're not members of our species."

D'Souza writes, in admiration of Singer: "Singer, virtually alone among their numbers, is uncompromisingly working out the implications of living in a truly secular society, one completely purged of Christian and transcendental foundations. In Singer, we may be witnessing someone both horrifying and yet somehow refreshing: an intellectually honest atheist."

Note that this does not serve as an attack on atheism. Were I to attack the worldview of atheism it would not look like this. Rather, it is an explanation of the logic of atheism, as displayed by Singer the atheist. Were I an atheist, I would be thinking in the same way.
Posted by John Piippo at 10:54 PM