A Synopsis of Michael Brown's Case for Jesus as the Messiah 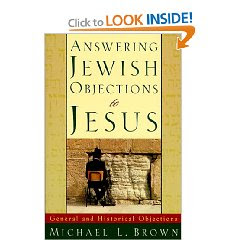 (This is especially for those who heard my message last Sunday out of Luke 18.)

In Luke 18:31 we read: Jesus took the Twelve aside and told them, "We are going up to Jerusalem, and everything that is written by the prophets about the Son of Man will be fulfilled.

This is high Christology; viz., the claim that Jesus makes regarding himself being the fulfillment of the ancient Jewish Messianic promises. There are things that are going to unfold and happen in Jerusalem when Jesus gets there. It’s like Jesus us saying to his disciples, “You’ve heard of these things before. You’ve longed for these things to happen. Now’s the time.”

So what did the prophets write about? I’m going to present the reasoning of Dr. Michael Brown , using his synopsis found in Lee Strobel’s The Case for the Real Jesus. I find his analysis compelling. He’s a great scholar, having done his Ph.D in Near Eastern Languages and Literature from NYU. And, he’s a Jew who has found Jesus to be the Messiah. Here are Brown’s bullet points. (Many of these are simply direct quotes from Brown’s interview.)

1. Long ago, as recorded in the book of Genesis, God gave specific promises to the tribe of Judah regarding the covenant God made between himself and Israel. For example, Genesis 49:10 says “The scepter will not depart from Judah.” There was a man named Jesse who was of the tribe of Judah. Jesse had a son named David.

2. Isaiah 11:1 says “A shoot will come up from the stump of Jesse; from his roots a Branch will bear fruit.” The word “Branch” is commonly used to refer to the Messiah. The idea is that from Jesse, who is from the tribe of Judah, there’s going to come a “Messiah” who will bear fruit. There’s going to be a lasting kingship through David.

3. In Jeremiah 23:5 God said that he will raise from David’s line “a righteous Branch, a king who will reign wisely.”

4. In the book of Isaiah we see references to someone called “the servant of the Lord.” Which means, “Messiah.” “Anointed One.” (The Greek words for “the Messiah” are “the Christ.”

5. Isaiah 42:1-4 say that the Messiah will not stop [falter] until he brings justice to the earth.

6. Isaiah 49 says that the “servant of the Lord” has the mission of re-gathering the tribes of Israel to bring them back to God.

7. In Isaiah 49:6 God says he will not only re-gather Israel. We read: “I will make you a light for the Gentiles, that you may bring my salvation to the ends of the earth.”

9. In Isaiah 52:13 – 53:12 we read that the Messiah will be highly exalted but first will suffer terribly. He will actually be disfigured in his suffering. The words here say the people of Israel didn’t get it. They thought he was suffering for his own sins and wickedness. They didn’t realize he was bearing their sins, suffering for them, and by his wounds there was healing for them. Then these verses speak of his death and his continued life after that.
a. Lee Strobel asked Michael Brown the question – “How important is this passage?”
b. Brown said: “It’s almost as if God said, ‘I want to make it so absolutely clear Yeshua is the Messiah that it’s undeniable.” I almost feel as if God would have to apologize to the human race and to the Jewish people for putting this passage into the scriptures when it so clearly points to Yeshua if he didn’t really mean it.”

11. The prophet Daniel prays in Daniel 9 that God would have mercy.
a. God gives Daniel a revelation about the temple being rebuilt.
b. Before this new temple is destroyed, Daniel is told that several things are going to happen.
c. This includes the bringing of everlasting atonement – the final dealing with sin.

12. The Second Temple is built.
a. The prophet Haggai lives to see this second temple built.
b. But it’s nothing like the first temple, Solomon’s temple. Solomon’s temple was a stunning physical structure, far more imposing than the second temple. It also had the glory of God there. When sacrifices were offered, fire came down and consumed them.
c. The second temple didn’t have the presence of God or the divine fire.

14. Then the prophet Malachi, who lived later, says God HIMSELF… will come to his temple and purify some of his people and bring judgment on others. Malachi uses a Hebrew term that always refers to God himself – the Lord – he will come to this Second Temple.

15. The second temple was destroyed in AD 70. The prophesied visitation of God had to take place before the second temple was destroyed. So guess what’s happening, e.g., a passage like John 7. "On the last and greatest day of the Feast [of Tabernacles – God, you have provided… like You did in the wilderness…; food…, and water. SO… SEND RAIN!!!], Jesus stood [in the temple courts]… and said in a loud voice, "If anyone is thirsty, let him come to me and drink. 38Whoever believes in me, as the Scripture has said, streams of living water will flow from within him." 39By this he meant the Spirit, whom those who believed in him were later to receive. Up to that time the Spirit had not been given, since Jesus had not yet been glorified. 40On hearing his words, some of the people said, "Surely this man is the Prophet." 41Others said, "He is the Christ.""

16. The prophecy of Haggai is fulfilled when Jesus enters the temple courts and says things like “I am the light of the world,” and “If you are thirsty come to me.”
a. In this regard Michael Brown says – “So it’s not a matter of maybe there’s another one who’s the Messiah. If it’s not Jesus (“Yeshua”), then throw out the Bible, because nobody except him accomplished what needed to be done prior to AD 70.
i. What divine visitation did take place if not for Yeshua?
ii. When else did God visit the second temple in a personal way?
iii. Who else atoned for sin?
iv. How was the glory of the second temple greater than the first?
v. Either the Messiah came two thousand years ago or the prophets were wrong and we can throw out the Bible.
vi. But they weren’t wrong. Yeshua is the Messiah – or nobody is.” (Strobel, Case for RJ, 198)

For the full text of Strobel’s interview with Brown pick up The Case for the Real Jesus. It’s an excellent read – the entire book.

For Brown’s more complete and scholarly writings on this go here.
Posted by John Piippo at 7:53 AM