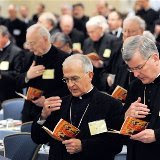 Today's cnn.com has an article re. Roman Catholic bishops who will confront Barack Obama on the abortion issue. The article states:

"Chicago Cardinal Francis George, president of the U.S. Conference of Catholic Bishops, is preparing a statement during the bishops' fall meeting that will press Obama on abortion.

The bishops suggested that the final document include the message that "aggressively pro-abortion policies" would be viewed "as an attack on the church.""