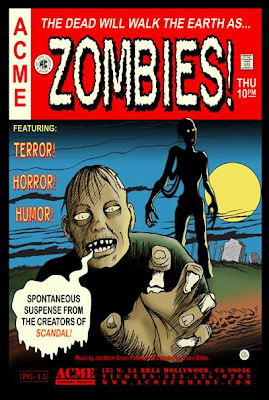 As we approach Halloween, we're seeing more and more zombies. So it's time to re-post David Chalmers's philosophically famous "zombie argument" against physicalism. In philosophy, few worldviews are more frightening than physicalism.
***


One of my academic interests is "the hard problem of consciousness." The urge to understand this poked me again as I read "I Me Mind: The Unending Quest to Explain Consciousness," a book review by Michael Robbins. Robbins appears to have read much of the relevant literature. He concludes, probably rightly, that no one has a clue how to solve this problem.

One of the major discussants is neuro-philosopher David Chalmers. Chalmers is a "property dualist," which reasons that consciousness is an emergent property of the physical brain. The upshot of this, for Chalmers, is that physicalism is false, because a non-physical property, viz. consciousness, exists. (Chalmers is not a "substance dualist," like philosopher J. P. Moreland is. See here.)

I used to present David Chalmers's "zombie argument" against physicalism in my logic classes. I thought the word "zombie" would interest my students. It's a hard argument to understand. And hard to teach. Here it is.


The “Zombie Argument” Against Physicalism

1. If *physicalism is true, then it is logically impossible for p-zombies to exist. ("P-zombie" = "philosophical zombie. Physicalism entails the logical [or metaphysical] impossibility of zombies. See here Stanford Encyclopedia of Philosophy, "Zombies," part 2 - "Zombies and Physicalism.")

2. It is logically possible for p-zombies to exist.

*P-zombie - i.e., "philosophical zombie" - a hypothetical being that is indistinguishable from a normal human being except that it lacks conscious experience, qualia, sentience, or sapience.

If physicalism is true, then there cannot be a world that is a physical duplicate of ours (that is, where everything is physically like in our world), which is not a duplicate simpliciter of our world (that is, which does not contain anything more or less than what our world contains).

But zombies are conceivable: creatures that are physically exactly like us, but which creatures lack conscious experiences.

If it is logically possible for zombies to exist, then consciousness cannot be explained reductively, and non-physical reality exists.


1. A philosophical zombie or p-zombie is a hypothetical being that is indistinguishable from a normal human being except that it lacks conscious experience, qualia, sentience, or sapience. When a zombie is poked with a sharp object, for example, it does not feel any pain. It behaves exactly as if it does feel pain (it may say "ouch" and recoil from the stimulus), but it does not actually have the experience of pain as a person normally does. (See “Philosophical Zombie,” in wikipedia - http://en.wikipedia.org/wiki/Philosophical_zombie)

2. According to physicalism, physical facts determine all other facts. This means, on physicalism, that there are no non-physical facts. Therefore, since all the facts about a p-zombie are fixed by the physical facts, and these facts are the same for the p-zombie and for the normal conscious human from which it cannot be physically distinguished, physicalism must hold that p-zombies are not possible. Therefore, zombie arguments support lines of reasoning that aim to show that zombies are possible. Another way to put this, from SEP: "If a zombie world is possible, consciousness does not in that sense logically supervene on the physical facts, and physicalism is false. If that view is correct, therefore, to prove that a zombie world is possible would be to disprove physicalism."

4. See the “zombie argument against physicalism” developed in detail by David Chalmers in The Conscious Mind (1996). According to Chalmers, one can coherently conceive of an entire zombie world: a world physically indiscernible from our world, but entirely lacking conscious experience. In such a world, the counterpart of every being that is conscious in our world would be a p-zombie.

The claim of Chalmers and others is a strictly logical claim. Which means: Since such a world is logically conceivable, Chalmers claims, it is possible; and if such a world is possible, then physicalism is false. (Note: “square circle,” or “married bachelor,” are examples of concepts that are logically inconceivable; there is no logically possible world in which such things could exist.) Chalmers is arguing only for logical possibility, and he maintains that this is all that his argument requires. He states: "Zombies are probably not naturally possible: they probably cannot exist in our world, with its laws of nature." It’s easy to imagine a “zombie.” A “zombie” is a creature physically identical to a human, functioning in all the right ways, having conversations, playing chess, but simply lacking all conscious experience.

So if a person can be physically identical to us yet without consciousness, then it would seem that consciousness is not a physical thing. “There is an explanatory gap here that is really something of an abyss,” says Chalmers.
Posted by John Piippo at 11:52 PM