Would Jesus Want to Convert Jews? 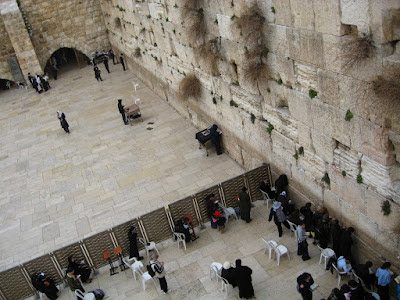 (I took this picture from above the Wailing Wall in Jerusalem)

In yesterday's Jerusalem Post Shmuley Boteach wrote an article called "Would Jesus Want to Convert Jews?" Here are Boteach's bullet points, with my responses.
1. Boteach asks, is belief in the divinity of Jesus compatible with Judaism? He responds: "It is not. Period. It never was, and it never will be." In declaring this he manages to offend those Jews who believe Jesus is God the Son and Messiah and find this compatible with their Judaism. Boteach thinks the two are incompatible, that's clear. But why?
2. Because: "This is what Jesus would want and says so with ferocious directness, going so far as condemn all who attempt to pry Jews away from Judaism: "Whoever goes against the smallest of the laws of Moses, teaching men to do the same, will be named least in the kingdom of heaven; but he who keeps the Law of Moses, teaching others to keep them, will be named great in the kingdom of heaven." (Matthew 5:19)."
Now this is astoundingly naive and false. Jesus was a Jew. At the heart of Jesus' mission was calling his fellow Jews to recognize him as Messiah and follow him. Jesus consistently claims to point his fellow Jews to the true meaning of Torah. Whether or not Jesus is correct, it remains true that Jesus was trying to convert Jews, not away from Judaism, but to Judaism as he saw it. Boteach's idea that Jesus is condemning "all who attempt to pry Jews away from Judaism" misses the point.
3. "Many Christians still have not evolved enough to respect the Jewish faith. It's bad for Christians because if they reject the Jewishness of Jesus they will never fully understand his teachings or his life."
Of course we must understand the Jewishness of Jesus. Many Christian scholars are heavily investing in this today. One cannot understand the real Jesus without understanding Jesus as a Jew, and understanding the Jewishness of his time. But my guess is that Boteach has not understood Jesus the Jew. To co-opt Jesus as being against prying Jews away from Judaism is like claiming that supporters of Gandhi are trying to turn Indians against India. It just misses the point. Just as Gandhi was after a true India and was in conflict with some governmental officials, so Jesus had a view of true Judaism which put him in conflict with some Jews of his time. I suspect Shmuley of not looking closely enough at Jesus the Jew.
4. Boteach writes: "Jesus was a Pharisaic rabbi. Everything he taught and lived was based on the Torah and the Talmud. From his proclamation that "The meek shall inherit the earth (Matt. 5:5) which comes from Psalm 37, to the famous Golden Rule of 'Do to others what you would they do to you," which derives from Leviticus 19, to his statement that 'the Sabbath was made for man and not man for the Sabbath,' whose origin is the Talmud (Yoma 85b), Jesus' mission was to renew Jewish attachment to the Torah in a time when the threads of tradition were being unwoven due to the oppressive hand of the occupying Roman beast."
Two thoughts:
a. Was Jesus a Pharisee? Clearly, Jesus conflicts with Pharisees. Clearly, Jesus consistently rejects the oral laws of the Pharisees. So it is false that "everything he taught and lived was based on the Torah and the Talmud." Cannot Boteach - like it or not - see the great tension and conflict between Jesus and the Pharisees over the Shema, Shabat, and so on and on and on? I think the idea that Jesus himself was a Pharisee is difficult to support. Rather than engagin in intra-Pharisaical dialogue Jesus refuses to align with any of the Jewish religio-political options of his time.
b. Jesus' mission is not best described as renewing Jewish attachment to the Torah. Jesus' self-described mission was to proclaim the good news of the kingdom of God and demonstrate the inbreaking of the kingdom in his very person. Jesus clearly extends his mission to non-Jews as seen, e.g., in the parable of the good Samaritan.
I see Boteach as twisting Jesus into someone to be used for his own purposes rather than looking at the real Jesus. Jesus surely would sympathize with those "Christ"-ians who believe that he is the Jewish Christ. In this regard I don't know what Shmuley as a Jew thinks of the idea of Messiah. I have Jewish friends who consider "Messiah" as a non-issue. For example, I once asked a friend who is a Jewish Rabbi for information on what Jews themselves say about Messiah. He told me he could find little on the subject, except point me to some of Abraham Heschel's writings.
Posted by John Piippo at 8:17 AM