Nietzsche's Dead Body May Be Relocated 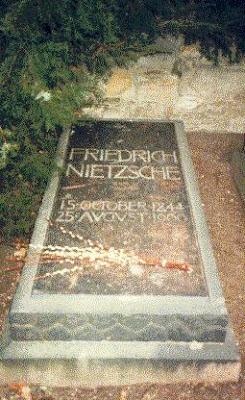 I tell my philosophy students that, were I an atheist, I'd follow Nietzsche (among a few others). I'm a fan of Nietzsche even though he had it wrong about God.
Nietzsche's dead. I know this because his remains lie in a grave in the eastern German village of Röcken. Now his grave and therefore remains are being threatened because the entire village of Röcken may be relocated due to the discovery of lignite under the village.
Today's Speigel Online says: "It's hard to say what the philosopher himself would have to say about all this. While being disturbed in one's final resting place can't be nice, Nietsche was no fan of what he called "monumental history." In his 1873 meditations "On the use and abuse of history for life," he warned against the kind of history that "serves the life of the past in such a way that it buries further living.""
Posted by John Piippo at 9:11 PM