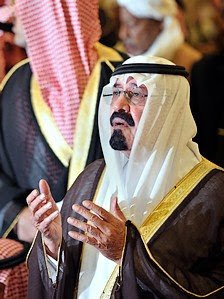 King Abdullah of Saudi Arabia is quoted in today's Jerusalem Post as calling for serious interfaith dialogue between the three monotheistic religions of Judaism, Christianity, and Islam. Abdullah states: "The 21st Century is posing economic, political and environmental questions, but also a religious question: Can Judaism, Christianity and Islam make room for each other? [I]f you can't solve it at the religious level, I doubt we'll be able to solve it at the political level."
From the Jesus-perspective I'm all for loving one another. We'll never agree on a number of core beliefs unless we all become Baha'is. But working to understand, disagree, even try to persuade, while loving - I think that's good.
I find it interesting that part of Abdullah's appeal is in response to the evangelistic atheists. He says: "I have noticed that the family system has weakened and that atheism has increased. That is an unacceptable behavior to all religions, to the Koran, the Torah and the Bible. We ask God to save humanity."
Abdullah adds: "The idea is to ask representatives of all monotheistic religions to sit together with their brothers in faith and sincerity to all religions, as we all believe in the same God." Ahhh... now that's where interfaith dialogue gets very tricky. The Koran's version of monotheism denounces Christian trinitarianism as non-monotheistic. While this is no problem if you're Eckhart Tolle and declare that you've got a belief system that's not really a belief system, for serious theologians to agree that "we all believe in the same God" will not only not be easy but will in many cases be impossible in principle.
Posted by John Piippo at 11:07 PM