How is your influence going? Which way is it going? Because of you, are people better, or worse?

I remember seeing dad read his Bible, usually in the evening before he went to bed. Dad read his Bible so much that his thumb wore through the leather cover. I have it now. Here it is. 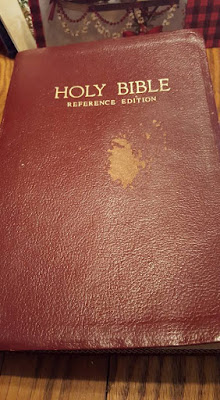 I received my own leather-covered Bible when I was confirmed in our Lutheran Church. I was twelve years old. My mother put my Bible somewhere - I didn't know where and I did not care. I never picked it up and read it.

Until I was 21. That's when Jesus rescued me out of a deep enslavement to evil. My life began to change for the better! And, I needed a Bible.

I drove to my parents' home. I asked, "Mom, do you know where my Bible is?"

She got it for me. I began to read. And read. I wore the leather out on it so much that the cover finally broke off. I still have this Bible. Here it is. 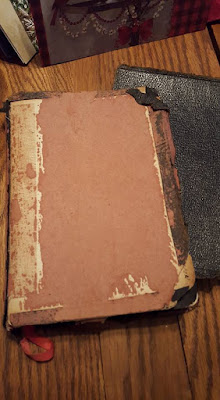 As the apostle Paul wrote:

Follow my example,
as I follow the example of Christ.
1 Cor. 11:1
And,
Join together in following my example, brothers and sisters,
and just as you have us as a model,
keep your eyes on those who live as we do.
Philippians 3:17
Posted by John Piippo at 9:45 AM